This text has two questions and an invitation that are at the heart of the Gospel of John: What are you looking for? Where are you staying? Come and see. 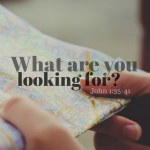 Click here to read my quick introduction to how to read the Gospel of John.

This text is John's introduction to Jesus.

When reading the New Testament, it is crucial to remember that in his own time, and in the lifetimes of the writers of the Bible, Jesus was a complete unknown outside of his circle of followers.

Therefore, it is best to read Matthew, Mark, Luke and John not with 2,000 years of hindsight, but with the perspective of a First Century Judean:

Just exactly who is this guy from that dinky, remote, nowheresville hamlet - Nazareth? Is that what it's called? And did you say he was the bastard son of Mary? That Joseph must have been a real loser to hook up with her. No self-respecting man would marry a woman like that. So we don't even know who his real father is?

The Gospels of Matthew, Mark, and Luke all begin with the baptism of Jesus in which signs from heaven are done which proclaim the status of Jesus in heaven (unlike his status in earthly terms):

In the Gospel of John, it is John the Baptist who sees the sign of the dove (there is no mention of a voice), and it is John who testifies to the heavenly status of Jesus: Lamb of God, Son of God.

(Aside: It's a bit confusing to keep all the Johns separated. There are three different ones. John, the disciple of Jesus and the author of this book. John the Baptist. And John the father of Simon and Andrew.)

There then follows an interesting exchange between two of John the Baptist's disciples and Jesus.

Imagine being one of those disciples. Imagine having the questions and opinions above, and then hearing John the Baptist say, "There is the Lamb of God; the Son of God." (Verses 1:34 and 36)

Note that when the disciples first approach Jesus, they use the much safer - and lower - status of "Teacher" to address him. "Teacher" is a big step above "Bastard son of Mary," but not even in the same ball park as "Son of God." They are moving in Jesus' direction, but still hedging their bets.

Notice too that it is Jesus who notices them following him, and it is he who turns to them.

There then follow two questions and an invitation that are at the heart of the Gospel of John:

The question, "What are you looking for?" is one of the great spiritual questions. What AM I looking for? It is a question that provokes searching and seeking for ... well, what are YOU looking for?

The theme of seeing / light / revealing (or their opposites blindness / darkness / hiding) runs through every passage of John.

Now, why is "Where are you staying?" the disciples answer to Jesus' question to them? In the logic of the Gospel of John, how is that a response to the question? (And in John, a second question in response to the first one IS an answer.)

A second dominant theme in John is staying, remaining and abiding.

For example, in John 14, Jesus says that he is going to prepare a place for his followers so that where he is they may be also. In John 15, Jesus says, "Abide in me as I abide in you." The issue of where-is-Jesus-so-that-I-might-abide-with-him is crucial in John.

Thus questions about staying, remaining, and abiding are not merely questions about the logistics of locations. They are questions of intimate, enduring relationships. William D. Mounce's Dictionary gives these meanings to the underlying Greek word used here:

And, in my humble opinion, these two questions and the invitation are still at the heart of our being Jesus' followers today.

Note: Historical background information in this post is drawn primarily from Bruce Malina and Richard Rohrbaugh, Social-Science Commentary on the Gospel of John, pages 49-55; and the writings of Amy-Jill Levine, et. al. See below.

29 The next day he saw Jesus coming toward him and declared, "Here is the Lamb of God who takes away the sin of the world! 30 This is he of whom I said, 'After me comes a man who ranks ahead of me because he was before me.' 31 I myself did not know him; but I came baptizing with water for this reason, that he might be revealed to Israel." 32 And John testified, "I saw the Spirit descending from heaven like a dove, and it remained on him. 33 I myself did not know him, but the one who sent me to baptize with water said to me, 'He on whom you see the Spirit descend and remain is the one who baptizes with the Holy Spirit.' 34 And I myself have seen and have testified that this is the Son of God."

35 The next day John again was standing with two of his disciples, 36 and as he watched Jesus walk by, he exclaimed, "Look, here is the Lamb of God!" 37 The two disciples heard him say this, and they followed Jesus. 38 When Jesus turned and saw them following, he said to them, "What are you looking for?" They said to him, "Rabbi" (which translated means Teacher), "where are you staying?" 39 He said to them, "Come and see." They came and saw where he was staying, and they remained with him that day. It was about four o'clock in the afternoon. 40 One of the two who heard John speak and followed him was Andrew, Simon Peter's brother. 41 He first found his brother Simon and said to him, "We have found the Messiah" (which is translated Anointed). 42 He brought Simon to Jesus, who looked at him and said, "You are Simon son of John. You are to be called Cephas" (which is translated Peter).

29 The very next day John saw Jesus coming toward him and yelled out, 30 "Here he is, God's Passover Lamb! He forgives the sins of the world! This is the man I've been talking about, 'the One who comes after me but is really ahead of me.' 31 I knew nothing about who he was—only this: that my task has been to get Israel ready to recognize him as the God-Revealer. That is why I came here baptizing with water, giving you a good bath and scrubbing sins from your life so you can get a fresh start with God."

32 John clinched his witness with this: "I watched the Spirit, like a dove flying down out of the sky, making himself at home in him. 33 I repeat, I know nothing about him except this: The One who authorized me to baptize with water told me, 'The One on whom you see the Spirit come down and stay, this One will baptize with the Holy Spirit.' 34 That's exactly what I saw happen, and I'm telling you, there's no question about it: This is the Son of God."

35 The next day John was back at his post with two disciples, who were watching. 36 He looked up, saw Jesus walking nearby, and said, "Here he is, God's Passover Lamb."

37 The two disciples heard him and went after Jesus. 38 Jesus looked over his shoulder and said to them, "What are you after?"

They said, "Rabbi" (which means "Teacher"), "where are you staying?"

39 He replied, "Come along and see for yourself."

They came, saw where he was living, and ended up staying with him for the day. It was late afternoon when this happened.

40 Andrew, Simon Peter's brother, was one of the two who heard John's witness and followed Jesus. 41 The first thing he did after finding where Jesus lived was find his own brother, Simon, telling him, "We've found the Messiah" (that is, "Christ"). 42 He immediately led him to Jesus. Jesus took one look up and said, "You're John's son, Simon? From now on your name is Cephas" (or Peter, which means "Rock").