You and I might not waste our efforts on the down trodden, the thorny, and the hardened, but God does. 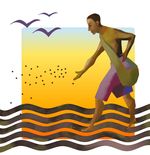 A sower went out

Sermon by the Rev. Dr. George Hermanson, "A Matter Of Perspective."

Matthew 13 might be called, "The Sermon on the Lake."

But let's begin by focusing on the Sower.

For those listening to Jesus, the behaviour of the Sower is either extremely reckless or extremely generous. They would certainly not be so careless as to waste so much good seed.

Seed was sown by hand, and the farmer would be very careful to make sure that all of his seed landed carefully only on the soil where it could grow. So the shock of this parable is immediate: some seeds fell on the path! Gasp! And if that isn't enough, next some seeds fall on rocky ground! And then some are cast among some weeds! When will this waste end? Finally, some seed fall on good soil. Whew.

Surely such wastefulness will be punished in the end. But no. The yield is 100, 60, and even 30, when the normal yield at that time would have been 4 or 5.

Those who have two good ears had better listen up.

But what are we to make of this parable of such exaggerated waste and reward?

Even the disciples are confused and must ask Jesus for an explanation.

As with all teaching stories, the options are exclusive, whereas in real life, all of us - at one time or another - are all 4 of the soils: worn down and down trodden; hard hearted and shallow; thorny and stunted by bad luck and bad influences. Have we not all had Good News snatched away; had an initial burst of enthusiasm fade at the first sign of trouble; had Good News get worn down by unrelenting cares and troubles?

The Good News is given even in the midst of various troubles and woes, faults and failings.

The calling of the community of faith is to have two good ears, and to be constantly open to having our worn down places ploughed up, turned over, loosened up; to having our rocky places named and removed, and our shallowness deepened and enriched; to having our thickets of cares and anxieties plucked out and space cleared for new growth. Who knows, maybe instead of eking out the bare minimum to stay alive, we might be showered with God's extravagant wastefulness.

Historical background information in this post is drawn primarily from Social-Science Commentary on the Synoptic Gospels, see link below, page 74.

1 That same day Jesus went out of the house and sat beside the sea. 2 Such great crowds gathered around him that he got into a boat and sat there, while the whole crowd stood on the beach. 3 And he told them many things in parables, saying: "Listen! A sower went out to sow. 4 And as he sowed, some seeds fell on the path, and the birds came and ate them up. 5 Other seeds fell on rocky ground, where they did not have much soil, and they sprang up quickly, since they had no depth of soil. 6 But when the sun rose, they were scorched; and since they had no root, they withered away. 7 Other seeds fell among thorns, and the thorns grew up and choked them. 8 Other seeds fell on good soil and brought forth grain, some a hundredfold, some sixty, some thirty. 9 Let anyone with ears listen!"

1 At about that same time Jesus left the house and sat on the beach. 2 In no time at all a crowd gathered along the shoreline, forcing him to get into a boat. 3 Using the boat as a pulpit, he addressed his congregation, telling stories.

"What do you make of this? A farmer planted seed. 4 As he scattered the seed, some of it fell on the road, and birds ate it. 5 Some fell in the gravel; it sprouted quickly but didn't put down roots, 6 so when the sun came up it withered just as quickly. 7 Some fell in the weeds; as it came up, it was strangled by the weeds. 8 Some fell on good earth, and produced a harvest beyond his wildest dreams.

9 "Are you listening to this? Really listening?"

18 "Study this story of the farmer planting seed. 19 When anyone hears news of the kingdom and doesn't take it in, it just remains on the surface, and so the Evil One comes along and plucks it right out of that person's heart. This is the seed the farmer scatters on the road.

20 "The seed cast in the gravel—this is the person who hears and instantly responds with enthusiasm. 21 But there is no soil of character, and so when the emotions wear off and some difficulty arrives, there is nothing to show for it.

22 "The seed cast in the weeds is the person who hears the kingdom news, but weeds of worry and illusions about getting more and wanting everything under the sun strangle what was heard, and nothing comes of it.

23 "The seed cast on good earth is the person who hears and takes in the News, and then produces a harvest beyond his wildest dreams."