Jesus doesn't promise us an easy life. Instead, he tells us the truth. And he promises us that the truth will set us free. I wonder how the words of today's passage have been true and freeing for us? 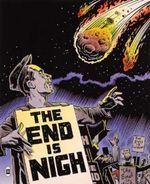 All will be thrown down.

Folks come to church expecting some advance preparation for Christmas. Instead, they get lessons about global warfare, plagues, confrontation, betrayal, persecution, and ... endurance and salvation. Well, maybe the lessons aren't so out of sync with our lives.

I sometimes think we should make the Reign of Christ a whole new Season in the Christian calendar just before Advent to give everyone a heads up that we headed to a cross and not just to a cozy stable.

In the unfolding of Luke's gospel, Chapter 20 has been a series of confrontations and conflicts with the authorities after Jesus has entered Jerusalem.

The 4 verses at the beginning of Chapter 21 about the widow giving her last two coins to the Temple offering - which are omitted from the lectionary - provide an intriguing transition to the "little apocalypse" of Chapter 21, and the arrest, trial, execution and resurrection which are told in Chapters 22 and following.

Taken out of context, the example of the widow's offering makes a great text for preaching about stewardship. But placed where it is by Luke, the phrase, "but she out of her poverty has put in all she had to live on," (verse 4) sets the scene - foreshadows - Jesus' giving of his all.

And as a friend brilliantly pointed out to me, the fact that the widow had TWO coins means that even her poverty she did have options: she could have given only one coin. But she - like Jesus - does not give in half measures. She - like Jesus - holds nothing back.

(Aside: And actually, the widow's offering is not a very helpful stewardship lesson, except for those who are destitute: If you are living day-to-day, hand-to-mouth, relying on hand-outs, and have no responsibilities for children or parents, no job, and no animals or property to maintain; and if all the money you have is not enough to even buy food for today and is basically worthless to you; then things cannot get much worse, so by all means give all that you have to church, you've got nowhere to go but up.)

Most of the liberal, main stream, historical Biblical scholars that I could consult, see the wording of this text as strongly influenced by the actual destruction of the temple by the Romans which occurred in 70, about 40 years after Jesus' death and resurrection.

That is to say, they believe it is altogether possible, maybe even likely, that Jesus made apocalyptic remarks like these. However, in recalling his words, his followers shaped the actual text in light of their own experience of the actual events.

It is easy - and probably correct - to read Verse 6 as a forecast by Jesus of dire things to come:

As for these things that you see (the Temple and its beautiful surroundings), the days will come when not one stone will be left upon another, all will be thrown down.

At the time of Jesus, it was customary for fathers who knew they were about to die, to gather their sons and make their last will and testament: forecasting future events, summing up their life, and giving blessings.

Those who were near death could forecast future events because they were living in a "thin space." That is, they were departing this life and entering the life to come, and so they could glimpse into the life to come and report back. The significance and accuracy of their forecasts would provide confirmation of the truth of all their earthly teachings, and increase their honour in death.

This experience was not unique to Jesus. And in fact would be better known today if we lived more closely with the dying.

However, it is also possible to read Verse 6 as a common sense observation about the impermanence of material things. All structures, no matter how grand and glorious, will decay and collapse, or be destroyed.

It is interesting that just after hearing Jesus commenting on the relative insignificance of offerings made by the wealthy, the next thing that happens is his disciples admiring the wealth and grandeur of the temple. I wonder what would happen if all church communities lived from a place of knowing their own buildings are impermanent and their own wealth is fleeting?

As I have already said, the scholars I read believe that the details reported in Verses 7 to 19 may or may not be the actual words of Jesus, but they are most certainly the actual later experiences of his followers at the time of the writing down of the oral tradition.

They remembered Jesus' words, and wrote them down so that they - and we - might be wise in turbulent times.

And so it might be best to risk extracting "general principles" from this passage, and avoid unfruitful speculations about the concrete details:

Jesus doesn't promise us an easy life. Instead, he tells us the truth. And he promises us that the truth will set us free. I wonder how the words of today's passage have been true and freeing for us?

Note: Historical background information is primarily from Bruce Malina and Richard Rohrbaugh, Social Science Commentary on the Synoptic Gospels, pages 310-314; and the writings of Amy-Jill Levine, et. al. See below.

1 He looked up and saw rich people putting their gifts into the treasury; 2 he also saw a poor widow put in two small copper coins. 3 He said, "Truly I tell you, this poor widow has put in more than all of them; 4 for all of them have contributed out of their abundance, but she out of her poverty has put in all she had to live on."

5 When some were speaking about the temple, how it was adorned with beautiful stones and gifts dedicated to God, he said, 6 "As for these things that you see, the days will come when not one stone will be left upon another; all will be thrown down."

7 They asked him, "Teacher, when will this be, and what will be the sign that this is about to take place?" 8 And he said, "Beware that you are not led astray; for many will come in my name and say, 'I am he!' and, 'The time is near!' Do not go after them.

9 "When you hear of wars and insurrections, do not be terrified; for these things must take place first, but the end will not follow immediately." 10 Then he said to them, "Nation will rise against nation, and kingdom against kingdom; 11 there will be great earthquakes, and in various places famines and plagues; and there will be dreadful portents and great signs from heaven.

12 "But before all this occurs, they will arrest you and persecute you; they will hand you over to synagogues and prisons, and you will be brought before kings and governors because of my name. 13 This will give you an opportunity to testify. 14 So make up your minds not to prepare your defense in advance; 15 for I will give you words and a wisdom that none of your opponents will be able to withstand or contradict. 16 You will be betrayed even by parents and brothers, by relatives and friends; and they will put some of you to death. 17 You will be hated by all because of my name. 18 But not a hair of your head will perish. 19 By your endurance you will gain your souls."

1 Just then he looked up and saw the rich people dropping offerings in the collection plate.
2 Then he saw a poor widow put in two pennies. 3 He said, "The plain truth is that this widow has given by far the largest offering today. 4 All these others made offerings that they'll never miss; she gave extravagantly what she couldn't afford—she gave her all!"

5 One day people were standing around talking about the Temple, remarking how beautiful it was, the splendor of its stonework and memorial gifts. Jesus said, 6 "All this you're admiring so much—the time is coming when every stone in that building will end up in a heap of rubble."

7 They asked him, "Teacher, when is this going to happen? What clue will we get that it's about to take place?"

8 He said, "Watch out for the doomsday deceivers. Many leaders are going to show up with forged identities claiming, 'I'm the One,' or, 'The end is near.' Don't fall for any of that. 9 When you hear of wars and uprisings, keep your head and don't panic. This is routine history and no sign of the end."

10 He went on, "Nation will fight nation and ruler fight ruler, over and over. 11 Huge earthquakes will occur in various places. There will be famines. You'll think at times that the very sky is falling.

12 "But before any of this happens, they'll arrest you, hunt you down, and drag you to court and jail. It will go from bad to worse, dog-eat-dog, everyone at your throat because you carry my name. 13 You'll end up on the witness stand, called to testify. 14 Make up your mind right now not to worry about it. 15 I'll give you the words and wisdom that will reduce all your accusers to stammers and stutters.

16 "You'll even be turned in by parents, brothers, relatives, and friends. Some of you will be killed. 17 There's no telling who will hate you because of me. 18 Even so, every detail of your body and soul—even the hairs of your head!—is in my care; nothing of you will be lost. 19 Staying with it—that's what is required. Stay with it to the end. You won't be sorry; you'll be saved."