This lesson contains no resurrection. But this lesson also contains trusting the amazing void. 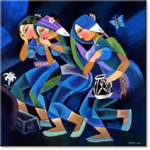 At dawn, the women came to the tomb

It may be necessary to give a brief preface to this reading of this lesson that the "they" are:

The women who had come with Jesus from Galilee.
Luke 23:55

It is they who had followed Joseph of Arimathea to see where Jesus' body had been placed, and had then gone home to wait for the Sabbath to be over.

Verse 1. Since it was not proper nor safe to be out at night, the women wait for early dawn, the first possible opportunity, to go to the tomb.

They take spices because a family obligation for a proper burial at the time of Jesus is to wrap the body with a cloth shroud and enclosed with spices. The body would normally be left for a year for the flesh to be cleansed away from the bones. At the end of this purification period, the bones would be collected into a special box and placed in a family crypt to await his resurrection.

Luke's reporting of these details gives a continuous testimony of the whereabouts of Jesus' body. This helps to rebut any later possible suggestions of a hoax or tricks. (It is unthinkable that anyone would go to a tomb on the Sabbath, or at night.) However, it also noteworthy that women are given this honour.

Verses 2 to 8. Luke gives no explanation of how the large, heavy, stone was rolled away.

Again, the fact that the women are puzzled / perplexed that the tomb has been opened and Jesus' body is not there confirms that they were not part of any hoax or trick.

The women are then honoured to receive a visitation from the realm of the Holy. They ask a question of the women, and then remind them of what they have already been told.

The fact that Jesus had earlier explained what would happen in the future confirms his special status as a Holy one of God.

Verses 9 and 10. It is only now that Luke tells us who these unnamed women are - and even then not all of them.

Verse 11. Sigh. This is not the first, nor the last, time that men have not believed the testimony of women.

Verse 12. But the ever impetuous Peter does get up and RUNS to the tomb. At this point, Peter has not had a heavenly vision, nor has he seen the risen Jesus, only the empty tomb and the linen grave cloths by themselves. But he too goes home amazed - not amazed but unbelieving as he had been hearing the women. Now he is amazing and believing at "what had happened."

This lesson contains no resurrection - it is a story of an empty tomb and of remembering what we have already been told would happen.

But this lesson also contains trusting the amazing void.

And it is a story that asks a question that is still worth pondering today:

Why do you look for the living among the dead?
Luke 24:5

How much of life - our anxious worrying - is spent looking for life / love / happiness in all the wrong places?

Remember what we have already been told - and live.

A happy and blessed Easter to everyone.

1 But on the first day of the week, at early dawn, they came to the tomb, taking the spices that they had prepared. 2 They found the stone rolled away from the tomb, 3 but when they went in, they did not find the body. 4 While they were perplexed about this, suddenly two men in dazzling clothes stood beside them. 5 The women were terrified and bowed their faces to the ground, but the men said to them, "Why do you look for the living among the dead? He is not here, but has risen. 6 Remember how he told you, while he was still in Galilee, 7 that "the Son of Man must be handed over to sinners, and be crucified, and on the third day rise again." 8 Then they remembered his words, 9 and returning from the tomb, they told all this to the eleven and to all the rest. 10 Now it was Mary Magdalene, Joanna, Mary the mother of James, and the other women with them who told this to the apostles. 11 But these words seemed to them an idle tale, and they did not believe them. 12 But Peter got up and ran to the tomb; stooping and looking in, he saw the linen cloths by themselves; then he went home, amazed at what had happened.

1 At the crack of dawn on Sunday, the women came to the tomb carrying the burial spices they had prepared. 2 They found the entrance stone rolled back from the tomb, 3 so they walked in. But once inside, they couldn't find the body of the Master Jesus.

4 They were puzzled, wondering what to make of this. Then, out of nowhere it seemed, two men, light cascading over them, stood there. 5 The women were awestruck and bowed down in worship. The men said, "Why are you looking for the Living One in a cemetery? 6 He is not here, but raised up. Remember how he told you when you were still back in Galilee 7 that he had to be handed over to sinners, be killed on a cross, and in three days rise up?" 8 Then they remembered Jesus' words.

9 They left the tomb and broke the news of all this to the Eleven and the rest. 10 Mary Magdalene, Joanna, Mary the mother of James, and the other women with them kept telling these things to the apostles, 11 but the apostles didn't believe a word of it, thought they were making it all up.

12 But Peter jumped to his feet and ran to the tomb. He stooped to look in and saw a few grave clothes, that's all. He walked away puzzled, shaking his head.