The Reality of the Resurrection

Jesus’ resurrection was not unexpected. His body was laid in a tomb in preparation for its eventual resurrection at the dawn of the age to come when finally God’s will would be done on earth as it is in heaven. His family would wait a year while Jesus’ sins - which were believed to be embedded in the body - were purged away with the flesh. At the end of the year, his bones would be collected and re-buried in anticipation of being used for the recreation of a new body for the life to come.

The surprise was that he was resurrected so quickly. On the third day! What could this mean?

No one is crucified any more, and so the word does not convey the visceral impact of fear that it held for everyone alive at the time of Jesus. The Romans could have killed Jesus quickly and easily after he was arrested. No need for a show trial and all the time and expense of whipping, mocking, stripping naked, and nailing alive to a wooden cross to die. 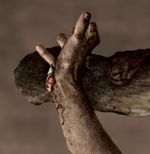 But the Romans were not just trying to kill Jesus. They were trying to kill what he stood for. To kill the bonds of loyalty with his followers. To kill any desire to continue to follow Jesus. And so, for cases like this, they had developed a form of public execution that was designed to have the maximum amount of humiliation and the maximum amount of pain for the longest possible time. The sign that was posted over Jesus on his cross may as well have read:
"Look what we did to Jesus.
Imagine what we will do to you."
That was the point of Jesus' brutal execution.

And for about 3 days, it worked. Knowing his execution was at hand, Jesus' followers betrayed him, denied knowing him, and abandoned him. Afterwards, they hid in fear behind locked doors.

But then an impossible possibility happened. Jesus showed up way ahead of schedule! What could this mean? To his followers it clearly meant one thing: Jesus’ earthly flesh contained no sins. It had not needed to rot away before he was ready for resurrection. He had been falsely executed. All that he had said and done was true. All that he stood for was trustworthy.

The point of the resurrection is to realize that just because something is real doesn’t mean it isn’t a lie. And when the lie is backed by armies and advertisers, it takes an impossible possibility to crack the cosmos open again. To see afresh what has always been true, and to hope anew for a reality that is always at hand. Hallelujah! Jesus is risen indeed!

Click here for an easy to print or email Adobe PDF version of this page, "The Reality of the Resurrection."

Historical background information is from Social Science Commentary on the Gospel of John, by Bruce Malina and Richard Rohrbaugh. Click here for an excerpt on Israelite Burial Customs.