Jesus' followers have an immediate and worthy need that should be attended to. It is something they have already done - with great success - and could do again - also likely with great success. Very tempting. But it is not, "What I came out to do." 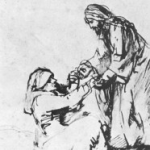 He cured many who were sick.

The fact that Simon's mother-in-law is living in her daughter's home suggests she has no husband or sons to care for her. Her healing is accomplished with a gesture - a personal touch. The visible sign of her healing is that she is able to return to her customary role. (That is, don't read this as an ode to housewifery. Though, one might want to observe that she is the first example of a person serving Jesus.) This healing on the Sabbath happens in the privacy of Simon's home.

But after the Sabbath ends, after sundown, the whole village (not "city" as per the NRSV) comes. The sick are healed, demons are cast out, and those who are healthy give public witness - and increased public status and honour - to what Jesus does.

Note that once again (see Mark 1:21-28), Jesus adamantly prevents the demons from speaking about him. He does this to honourably demonstrate that he is not personally promoting himself; he is not personally seeking increased status and fame. Others may give him increased status and fame, but like a truly honourable person, Jesus will not publicly receive it. To do so would be highly dishonourable and shameless.

The fact that Jesus prays raises distracting questions about who Jesus - as God - would be praying to? Personally, I don't believe Jesus was simply talking to himself. But rather this is a brief glimpse into the reality that even Jesus needed prayer; needed the quiet; needed set aside time to be in connection with God. (And actually, doesn't the doctrine of the Holy Trinity pretty much say Jesus and God are not the same person?)

Interestingly, Jesus' followers then - as too often, now - are not praying - they are busy worrying about immediate needs.

Others (sorry I do not have the reference any longer) have pointed out that Verses 38 and 39 are an excellent snapshot of leadership.

Imagine how those who were searching for Jesus to heal them would have felt?

The leadership snapshot here is:

I wonder if our congregations face this same trap, and what they might be like if they always successfully avoided it? We certainly would not be here today if Jesus had stayed home like a loyal local son and healed the good folks who needed him there.

Note: Historical background information in this post is drawn primarily from Bruce Malina and Richard Rohrbaugh, Social-Science Commentary on the Synoptic Gospels, pages 149-150; and the writings of Amy-Jill Levine, et. al. See link below.

29 As soon as they left the synagogue, they entered the house of Simon and Andrew, with James and John. 30 Now Simon's mother-in-law was in bed with a fever, and they told him about her at once. 31 He came and took her by the hand and lifted her up. Then the fever left her, and she began to serve them.

32 That evening, at sundown, they brought to him all who were sick or possessed with demons. 33 And the whole city was gathered around the door. 34 And he cured many who were sick with various diseases, and cast out many demons; and he would not permit the demons to speak, because they knew him.

35 In the morning, while it was still very dark, he got up and went out to a deserted place, and there he prayed. 36 And Simon and his companions hunted for him. 37 When they found him, they said to him, "Everyone is searching for you." 38 He answered, "Let us go on to the neighboring towns, so that I may proclaim the message there also; for that is what I came out to do." 39 And he went throughout Galilee, proclaiming the message in their synagogues and casting out demons.

29 Directly on leaving the meeting place, they came to Simon and Andrew's house, accompanied by James and John. 30 Simon's mother-in-law was sick in bed, burning up with fever. They told Jesus. 31 He went to her, took her hand, and raised her up. No sooner had the fever left than she was up fixing dinner for them.

32 That evening, after the sun was down, they brought sick and evil-afflicted people to him, 33 the whole city lined up at his door! 34 He cured their sick bodies and tormented spirits. Because the demons knew his true identity, he didn't let them say a word.

35 While it was still night, way before dawn, he got up and went out to a secluded spot and prayed. 36 Simon and those with him went looking for him. 37 They found him and said, "Everybody's looking for you."

38 Jesus said, "Let's go to the rest of the villages so I can preach there also. This is why I've come." 39 He went to their meeting places all through Galilee, preaching and throwing out the demons.