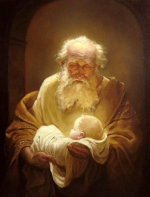 Simeon took Jesus in his arms and praised God, saying ...

Year B
Christmas 1
December 27, 2020
First Sunday after Christmas Day between December 26 and January 1 inclusive.
May be replaced by readings for Epiphany if January 1.

The circumcision and naming of the infant Jesus on the 8th day is parallel to similar events that Luke records about the birth of John the Baptizer, Luke 1:59 and following. This ritual marks the male child as a descendant of Abraham, and also as the son of the father - in this case, Joseph. Needless to say, in a patriarchal culture this marking was significant and crucial for securing the infant and his mother's place in the community.

The purification ritual, Luke 2:22-24, refers to is the ritual required for a woman following childbirth, and for the dedication to the Lord of first-born males. Since blood was unclean, women needed to undergo cleansing or purification rituals after each period and birth.

Note for a third time, the parallel between John and Jesus of the concluding comment:

By the time we have finished reading Chapters 1 and 2 of Luke, we should realize that the stage has been set for a powerful (but non-violent - at least on God's side) confrontation between two kingdoms - two ways of being in the world. The Pax Romana of Caesar - the way of peace through force of arms; and the peace of Christ, the way of peace through justice.

Note: Historical background information in this post is drawn primarily from Bruce Malina and Richard Rohrbaugh, Social-Science Commentary on the Synoptic Gospels, pages 233-234; and the writings of Amy-Jill Levine, et. al. See link below.

25 Now there was a man in Jerusalem whose name was Simeon; this man was righteous and devout, looking forward to the consolation of Israel, and the Holy Spirit rested on him. 26 It had been revealed to him by the Holy Spirit that he would not see death before he had seen the Lord's Messiah. 27 Guided by the Spirit, Simeon came into the temple; and when the parents brought in the child Jesus, to do for him what was customary under the law, 28 Simeon took him in his arms and praised God, saying,

29 "Master, now you are dismissing your servant in peace,
according to your word;
30 for my eyes have seen your salvation,
31      which you have prepared
in the presence of all peoples,
32 a light for revelation to the Gentiles
and for glory to your people Israel."

33 And the child's father and mother were amazed at what was being said about him. 34 Then Simeon blessed them and said to his mother Mary, "This child is destined for the falling and the rising of many in Israel, and to be a sign that will be opposed 35 so that the inner thoughts of many will be revealed—and a sword will pierce your own soul too."

36 There was also a prophet, Anna the daughter of Phanuel, of the tribe of Asher. She was of a great age, having lived with her husband seven years after her marriage, 37 then as a widow to the age of eighty-four. She never left the temple but worshiped there with fasting and prayer night and day. 38 At that moment she came, and began to praise God and to speak about the child to all who were looking for the redemption of Jerusalem.

39 When they had finished everything required by the law of the Lord, they returned to Galilee, to their own town of Nazareth. 40 The child grew and became strong, filled with wisdom; and the favor of God was upon him.

22 Then when the days stipulated by Moses for purification were complete, they took him up to Jerusalem to offer him to God 23 as commanded in God's Law: "Every male who opens the womb shall be a holy offering to God," 24 and also to sacrifice the "pair of doves or two young pigeons" prescribed in God's Law.

25 In Jerusalem at the time, there was a man, Simeon by name, a good man, a man who lived in the prayerful expectancy of help for Israel. And the Holy Spirit was on him. 26 The Holy Spirit had shown him that he would see the Messiah of God before he died. 27 Led by the Spirit, he entered the Temple. As the parents of the child Jesus brought him in to carry out the rituals of the Law, 28 Simeon took him into his arms and blessed God:

29 God, you can now release your servant;
release me in peace as you promised.
30 With my own eyes I've seen your salvation;
31   it's now out in the open for everyone to see:
32 A God-revealing light to the non-Jewish nations,
and of glory for your people Israel.

33 Jesus' father and mother were speechless with surprise at these words. 34 Simeon went on to bless them, and said to Mary his mother,

This child marks both the failure and
the recovery of many in Israel,
A figure misunderstood and contradicted—
35       the pain of a sword-thrust through you—
But the rejection will force honesty,
as God reveals who they really are.

36 Anna the prophetess was also there, a daughter of Phanuel from the tribe of Asher. She was by now a very old woman. She had been married seven years 37 and a widow for eighty-four. She never left the Temple area, worshiping night and day with her fastings and prayers. 38 At the very time Simeon was praying, she showed up, broke into an anthem of praise to God, and talked about the child to all who were waiting expectantly for the freeing of Jerusalem.

39 When they finished everything required by God in the Law, they returned to Galilee and their own town, Nazareth. 40 There the child grew strong in body and wise in spirit. And the grace of God was on him.

Posted at 01:43 PM in Advent-Christmas, Year B | Permalink