As the story of Jesus' life is bookended with a special embedding of the spiritual and the material (spiritual conception at birth; spiritual body at resurrection), so too, just within each bookend, as the first and last books on the shelf, are stories of total shame, violation and degradation (pregnancy outside of wedlock; naked execution on a cross). 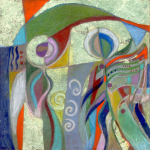 Shame remembered and spoken
of is shame that can be healed

The history of the Church's reflection on the stories of Jesus' birth is probably as complicated and mysterious as the stories themselves. It is probably impossible for us to hear the birth stories - to "get" them - with same ears - the same understanding - as the first hearers would have.

For one thing, we need to remind ourselves that for many centuries the birthday of Jesus was not a major celebration in the church. The church does not exist because Jesus was born; it exists because Jesus was crucified, died, was buried, and rose again on the third day. Holy Week and Easter Sunday are the founding festivals of the church.

We also need to remind ourselves that it is only within recent times that childhood is understood to be a time of development with genuinely different phases, ages, and stages; with genuine novelty and growth at each stage. Prior to this, children were understood to be like young plants that simply grew into larger versions of themselves, but with no fundamentally different developments along the way.

The spiritual conception of Jesus at the beginning of his life is just another way of pressing home the question, "Who do you say that I am?" Is God present in Jesus or not? And if God is present in Jesus, how would you describe that?

Personally I don't think it is helpful or fruitful to speculate how this could be "scientifically" true since science rules God out of any explanation of what is really real right from the get go. I'm a big fan of science, don't get me wrong. I just don't think there is any scientific evidence that science is the ONLY way of knowing what is really real.

So basically, I'm prepared to believe that Jesus was really born, and that Mary, who was the only person who was present at both his conception and his death, and who pondered these things, was able to testify that, "You know, there was something special about my dear Jesus right from the beginning."

I'm also prepared to believe there is some historical authenticity to the story, because if you momentarily remove it from the warmth and peacefulness of Christmas, it is a frightening and terrifying tale:

A young woman (as young as 12 or 13) is caught alone by a powerful male who says, "Don't be afraid, this won't hurt. You are going to be overpowered and become pregnant. I'll leave you. You'll have a baby out of wedlock. And no one will believe your story of how you got pregnant."

Preachers, especially powerful males, should be aware of the memory traces this story may stir up among their congregations.

What is also shocking about this story though, is that it is preserved and told as being the origins of the Holy One, our Jesus.

If you don't think the gossip about Joseph not being the real father and Mary being pregnant before they married didn't make the rounds, you have never lived in a small town. And if you don't think that gossip and rumours dogged Jesus everywhere he went - including to the cross - you have no idea how far people will go to keep someone in their place.

And so, just as the story of Jesus' life is bookended with a special embedding of the spiritual and the material (spiritual conception at birth; spiritual body at resurrection), so too, just within each bookend, as the first and last "books" on the shelf, are stories of total shame, violation and degradation (pregnancy outside of wedlock; naked execution on a cross).

And just as the opening of the story of Jesus' execution is his struggle in the Garden of Gethsemane, ending with, "Not my will but thine be done;" so there is a parallel in the story of Jesus' conception, "I am the Lord's servant. Let it be to me as you have said."

May it be so for us, here and now. May our shaming be remembered, not buried, and may it be redeemed by the power of God's love and empowered to bring forth new life to the glory of God.

Note: Historical background information in this post is drawn primarily from Bruce Malina and Richard Rohrbaugh, Social-Science Commentary on the Synoptic Gospels, pages 227-228; and the writings of Amy-Jill Levine, et. al. See link below.

26 In the sixth month the angel Gabriel was sent by God to a town in Galilee called Nazareth, 27 to a virgin engaged to a man whose name was Joseph, of the house of David. The virgin's name was Mary. 28 And he came to her and said, "Greetings, favored one! The Lord is with you." 29 But she was much perplexed by his words and pondered what sort of greeting this might be. 30 The angel said to her, "Do not be afraid, Mary, for you have found favor with God. 31 And now, you will conceive in your womb and bear a son, and you will name him Jesus. 32 He will be great, and will be called the Son of the Most High, and the Lord God will give to him the throne of his ancestor David. 33 He will reign over the house of Jacob forever, and of his kingdom there will be no end." 34 Mary said to the angel, "How can this be, since I am a virgin?" 35 The angel said to her, "The Holy Spirit will come upon you, and the power of the Most High will overshadow you; therefore the child to be born will be holy; he will be called Son of God. 36 And now, your relative Elizabeth in her old age has also conceived a son; and this is the sixth month for her who was said to be barren. 37 For nothing will be impossible with God." 38 Then Mary said, "Here am I, the servant of the Lord; let it be with me according to your word." Then the angel departed from her.

26 In the sixth month of Elizabeth's pregnancy, God sent the angel Gabriel to the Galilean village of Nazareth 27 to a virgin engaged to be married to a man descended from David. His name was Joseph, and the virgin's name, Mary. 28 Upon entering, Gabriel greeted her:

Good morning!
You're beautiful with God's beauty,
Beautiful inside and out!
God be with you.

29 She was thoroughly shaken, wondering what was behind a greeting like that. 30 But the angel assured her, "Mary, you have nothing to fear. God has a surprise for you: 31 You will become pregnant and give birth to a son and call his name Jesus.

32 He will be great,
be called 'Son of the Highest.'
The Lord God will give him
the throne of his father David;
33 He will rule Jacob's house forever—
no end, ever, to his kingdom."

The Holy Spirit will come upon you,
the power of the Highest hover over you;
Therefore, the child you bring to birth
will be called Holy, Son of God.

36 "And did you know that your cousin Elizabeth conceived a son, old as she is? Everyone called her barren, and here she is six months' pregnant! 37 Nothing, you see, is impossible with God."

Yes, I see it all now:
I'm the Lord's maid, ready to serve.
Let it be with me
just as you say.

Then the angel left her.

Posted at 12:36 PM in Advent-Christmas, Year B | Permalink