If you stop and really think about it, the most difficult "miracle" in today's text is not the raising of the girl from death, nor the healing of the woman who had been bleeding for 12 years. The most difficult healing was including the despised tax collector Matthew back into community. Don't believe it? Try thinking of a person your community despises and invite them to church with you. 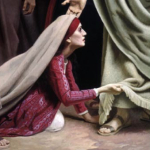 Year A
Pentecost NN
Not used this year.
Sunday Between June 5 and June 11 Inclusive, if after Trinity Sunday.
Proper 5, Ordinary Time 10

Following the Sermon on the Mount, Chapters 5 through 7, there follows a series of healing stories and calling / discipleship stories:

The effect of Chapters 8 and 9 is to show that Jesus is not only inspiring, but is also able to put his words into actions.

But for those of us with a scientific and modern medicine understanding, it is crucial to focus NOT on the actions, but on the inter-actions - the relationships - between Jesus and those who come to him in order for us to truly get what Matthew is wanting us to know.

One distinction that is important to note is the difference between healing a disease and casting out a demon. At the time of Jesus, demons, or unclean spirits, were understood to be part of unseen realm of being. Evil attacked good, and anyone whose behaviour deviated in the least from socially accepted norms would be closely scrutinized and evaluated for the cause of their deviant behaviour. If the cause was understood to be an unclean spirit, the person would be forced out of their family and community to live at the margins.

So in casting out unclean spirits, Jesus is demonstrating that he is a Holy Man of God with greater authority and power than the unclean spirits. This is illustrated by the frequent honouring of Jesus by the demons - they are the first to address him with such high titles as "Son of God."

The focus for us today is NOT to debate the reality of unclean spirits.

We need to focus on where we stand in relation to the authority of Jesus to be able to act decisively in our lives for our good.

Note that although there is no personification of unclean spirits, the story of Jesus "rebuking the wind and the sea" to calm the storm (Matthew 8:23-27) is a similar demonstration of Jesus' authority over unseen evil spirits which were causing the storm.

Not "Faith" or "Belief," But Trust and Loyalty
Not "Healing," But Hospitality

When we pay close attention to the relationships between Jesus and others in the healing stories, we see over and over how it is the other's trust in Jesus that is key to their healing:

In the Bible, illness is a disturbance at two levels. One is the physical symptom: leprosy, fever, blindness, "illness," paralysis, bleeding, etc.

What is revolutionary about Jesus is not so much his healing, but his hospitality. Jesus eats with tax collectors and sinners (Matthew 9:11). No self-respecting Jewish man would associate with these sorts of people. But Jesus does, and his radical hospitality which heals social disruptions is the first step of his healing which then addresses the physical symptoms which had caused people to be socially isolated and shunned.

Jesus' radical hospitality draws not only the sick and sinners, but also a Roman army officer and a leader of a synagogue - and Jesus receives them equally. This hospitality is the mercy rather than the ritual and social correctness that Jesus refers to in Matthew 9:13.

This hospitality is illustrated by the story of the two daughters in Matthew 9:18-26.

Notice the parallels between the two stories:

Synagogue Leader: "Come and lay your hand on her, and she will live."
Bleeding Woman: "If I only touch his cloak, I will be made well."

The convictions, "she will live," and "I will be made well," are NOT "faith" or "belief" as the translation in the NRSV has it. They are trust and loyalty, a deep openness to this Holy Man of God, Jesus.

Jesus explicitly says that it is this trust that has made her well. And not only does her physical symptom cease, but in referring to the woman as "daughter," Jesus publicly affirms her loyalty - her bond of kinship - with him.

Notice that when Jesus arrives at the leader's house, he does NOT say to the crowd of mourners, "Stick around and watch me." Nor does he claim that he will actually bring someone back to life from death. Jesus is not in the magic trick business. He is not in the celebrity, fame and glory business. He is in the being-the-real-presence-of-God business. He sends the crowds away; and he down plays what he is doing because his focus is on this one daughter and her father's plea.

Because we tend to focus on the action in these stories, we get misled into fruitless conversations about miracles. How did Jesus do that? Did that really happen? Why doesn't that sort of thing happen today? And haven't science and medicine proven that demons and spirits do not cause illness? So whatever happened back then really has no relevance now.

But if we focus on the inter-actions - the relationships - we see that what is going on is social healing.

Jesus receives everyone: Roman army officer, synagogue leader; tax collector; bleeding woman; leper. People who would otherwise despise each other; avoid being in the same room with each other; are connected because they connect with Jesus. The healing and forgiveness that Jesus provides restores relationships, restores the broken bonds of community.

The effect of Jesus' life and teachings was that people no longer accepted social brokenness - sin and sickness and second guessing (i.e. lack of trust and loyalty) - as irreversible; as powers that one could do anything about. Jesus demonstrated that there was power, was authority, were choices that could - and did - do something about these things.

Jesus demonstrated that the power of God's presence was embedded in mercy and not in religious rituals (Matthew 9:13). But one had to stop being hopeless and hapless, stop being isolated; and start connecting and trusting. Because "mercy" is a relationship.

If you stop and really think about it, the most difficult "miracle" in today's text is not the raising of the girl from death, nor the healing of the woman who had been bleeding for 12 years. The most difficult healing was including the despised tax collector Matthew back into community. Don't believe it? Try thinking of a person your community despises and invite them to church with you.

Historical background information in this post is drawn primarily from Social-Science Commentary on the Synoptic Gospels, see below, pages 59-62.

9 As Jesus was walking along, he saw a man called Matthew sitting at the tax booth; and he said to him, "Follow me." And he got up and followed him. 10 And as he sat at dinner in the house, many tax collectors and sinners came and were sitting with him and his disciples. 11 When the Pharisees saw this, they said to his disciples, "Why does your teacher eat with tax collectors and sinners?" 12 But when he heard this, he said, "Those who are well have no need of a physician, but those who are sick. 13 Go and learn what this means, 'I desire mercy, not sacrifice.' For I have come to call not the righteous but sinners."

18 While he was saying these things to them, suddenly a leader of the synagogue came in and knelt before him, saying, "My daughter has just died; but come and lay your hand on her, and she will live." 19 And Jesus got up and followed him, with his disciples. 20 Then suddenly a woman who had been suffering from hemorrhages for twelve years came up behind him and touched the fringe of his cloak, 21 for she said to herself, "If I only touch his cloak, I will be made well." 22 Jesus turned, and seeing her he said, "Take heart, daughter; your faith has made you well." And instantly the woman was made well. 23 When Jesus came to the leader's house and saw the flute players and the crowd making a commotion, 24 he said, "Go away; for the girl is not dead but sleeping." And they laughed at him. 25 But when the crowd had been put outside, he went in and took her by the hand, and the girl got up. 26 And the report of this spread throughout that district.

9 Passing along, Jesus saw a man at his work collecting taxes. His name was Matthew. Jesus said, "Come along with me." Matthew stood up and followed him.

10 Later when Jesus was eating supper at Matthew's house with his close followers, a lot of disreputable characters came and joined them. 11 When the Pharisees saw him keeping this kind of company, they had a fit, and lit into Jesus' followers. "What kind of example is this from your Teacher, acting cozy with crooks and riff-raff?"

12 Jesus, overhearing, shot back, "Who needs a doctor: the healthy or the sick? 13 Go figure out what this Scripture means: 'I'm after mercy, not religion.' I'm here to invite outsiders, not coddle insiders."

18 As he finished saying this, a local official appeared, bowed politely, and said, "My daughter has just now died. If you come and touch her, she will live." 19 Jesus got up and went with him, his disciples following along.

20 Just then a woman who had hemorrhaged for twelve years slipped in from behind and lightly touched his robe. 21 She was thinking to herself, "If I can just put a finger on his robe, I'll get well." Jesus turned—caught her at it. Then he reassured her: "Courage, daughter. You took a risk of faith, and now you're well." 22 The woman was well from then on.

23 By now they had arrived at the house of the town official, and pushed their way through the gossips looking for a story and the neighbors bringing in casseroles. 24 Jesus was abrupt: "Clear out! This girl isn't dead. She's sleeping." They told him he didn't know what he was talking about. 25 But when Jesus had gotten rid of the crowd, he went in, took the girl's hand, and pulled her to her feet—alive. 26 The news was soon out, and traveled throughout the region.