It is not enough for us to hear these words of Jesus; to study them; to be inspired by them; to have hopes / aspirations / dreams based on them. We must ACT on them; practice them; live them in our everyday lives. 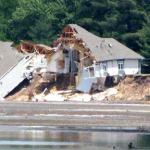 A house built on sand

Pentecost NN
Not used this year
Sunday Between May 29 and June 4 Inclusive, if after Trinity Sunday.
Proper 4, Ordinary Time 9

Verses 21-23, continue the teaching against false prophets that began in Matthew 7:12-20.

But here Jesus ups the ante. For the usual warnings about false appearances (crying "Lord, Lord") and false promises ("prophesying in your name") and judging by the results ("casting out demons in your name") are subjected to what is truly at the heart of Jesus message:

doing the will of my Father in heaven.

The emphasis on "doing" is then stressed in the following parable about the two foundations, one of sand and the other of rock and a teaching from Jesus about a difference between those who are wise and those who are foolish:

It has nothing to do with what we usually associate with wisdom: knowledge, many years of experience, perspective, intelligence, insight, etc.

Nor does it have to do with HEARING what Jesus has said. Both cases begin - "Everyone who hears these words of mine ..."

The difference between being either wise or foolish is in ACTING or NOT acting.

It is not enough for us to hear these words of Jesus; to study them; to be inspired by them; to have hopes / aspirations / dreams based on them. We must ACT on them; practice them; live them in our everyday lives.

So whatever passage we read from the Sermon on the Mount, we must hear it with one question in mind:

What must I DO to make this the bedrock of how I live?

The challenge for those who preach and those who hear is to be doers of the Word.

And what is the great challenge of being doers of the Word?

The first challenge is that it is not rocket science. It is quite simple really. So no one has any excuse:

I really would love to be a doer of the word, but it's quite complicated really. I really don't understand what Jesus is getting at.

Wrong! There is no getting off the hook because of complexity.

The second challenge is that it runs contrary to most of what our culture encourages us to do - to be hungry for - to put our trust in. Want to find out how hard this is? Try taping "Consider the lilies of the field" on every credit card you own - and actually stop and consider the lilies every time you reach for your wallet.

Aside: I've always thought that a corollary of the parable of the two foundations is:

Build your house of faith BEFORE the storm hits.

The foundation of stone comes only through years of hearing and doing these words of Jesus. It is too late to trying building anything once the storm has started. Don't believe me? Try carrying a sheet of plywood in a high wind.

The astonishment of the crowd at the conclusion of the Sermon on the Mount testifies that Jesus is acquiring a reputation and honour that is far above his birth as the illegitimate son of a lowly carpenter in a backwoods village.

The crowds attest that Jesus is teaching them in a way that the scribes never have.

But this is dangerous.

Because it sets the stage for the later confrontations that will occur as the Chief Priests, scribes, and Pharisees assert their status - and the social order.

Historical background information in this post is drawn primarily from Social-Science Commentary on the Synoptic Gospels, see below, pages 53-54.

28 Now when Jesus had finished saying these things, the crowds were astounded at his teaching, 29 for he taught them as one having authority, and not as their scribes.

21 "Knowing the correct password—saying 'Master, Master,' for instance—isn't going to get you anywhere with me. What is required is serious obedience—doing what my Father wills. 22 I can see it now—at the Final Judgment thousands strutting up to me and saying, 'Master, we preached the Message, we bashed the demons, our God-sponsored projects had everyone talking.' 23 And do you know what I am going to say? 'You missed the boat. All you did was use me to make yourselves important. You don't impress me one bit. You're out of here.'

24 "These words I speak to you are not incidental additions to your life, homeowner improvements to your standard of living. They are foundational words, words to build a life on. If you work these words into your life, you are like a smart carpenter who built his house on solid rock. 25 Rain poured down, the river flooded, a tornado hit—but nothing moved that house. It was fixed to the rock.

26 "But if you just use my words in Bible studies and don't work them into your life, you are like a stupid carpenter who built his house on the sandy beach. 27 When a storm rolled in and the waves came up, it collapsed like a house of cards."

28 When Jesus concluded his address, the crowd burst into applause. They had never heard teaching like this. 29 It was apparent that he was living everything he was saying—quite a contrast to their religion teachers! This was the best teaching they had ever heard.