Walking on the sea is not an idle, capricious, magic trick. After spending time alone in prayer, Jesus has stepped out onto the back of a chaotic and dangerous spirit to go and be with his friends. 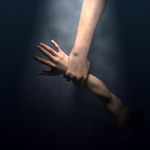 Jesus immediately reached out his hand

I love this story.

First, my usual warning NOT to get distracted by the special effects. Too often modern day preachers spend all their time trying to make the "miracle" seem scientifically plausible, and in effect explain away the significance of the story. Believing in God is already scientifically problematic, so instead of being plausible, invite your congregation to wonder.

Having said that, it is important to know that at the time of Jesus, what happens in this story is NOT that Jesus walks on water. Jesus walks on the sea. And the sea was understood to be a living, chaotic, potentially deadly spirit.

When the disciples see Jesus walking on the sea, they are not relieved, do not shout for joy expecting that Jesus has come to rescue them from the storm (also caused by spirits). Instead, they are terrified. The word used here for "terrified" can also be used to describe a sea that has been agitated and stirred up. In other words, the disciples' inner state is now a perfect reflection of their outer circumstances.

They are terrified because they would realize that they are seeing with their human eyes events that can only happen in the realm of the spirits - their first reaction is that they are seeing a ghost. They are terrified because while spirits are everywhere in the human realm, it is deadly for humans to be in the realm of the spirits.

When Jesus immediately says to them, "Take courage, do not be afraid," he is inviting them to have HIS inner state instead of theirs. Walking on the sea is not an idle, capricious, magic trick. After spending time alone in prayer, Jesus has stepped out onto the back of a chaotic and dangerous spirit to go and be with his friends.

What happens next is a poignant testimony of the reality of discipleship, of being a follower of Jesus.

Good old impetuous Peter responds, "Lord, if it is you, command me to come to you."

It is important to note that Peter does not act on his own impulse or authority. He asks to be commanded to come to Jesus. He gets out of the boat under the protection of the authority of Jesus. And Peter does not go for a stroll on the sea; he does only what he has been commanded, he comes toward Jesus.

And for a brief few steps, it works!

Peter too is able to walk on the back of the chaotic, dangerous spirit, the sea. But as we all know too well, there are many distractions in life that take our attention away from what we most cherish. And instead of keeping his focus on Jesus, Peter notices the wind, and his bond with Jesus is weakened.

Notice that Peter BEGINS to sink. That is, Peter is not walking on water. No one BEGINS to sink in water. Try standing on water yourself and see how much time you have to cry out while beginning to sink.

The issue in this story is not intellectual faith / belief. The issue is loyalty / trust, and not getting distracted in times of trouble and testing.

When they get into the boat, the encounter between Jesus and the spirits of the sea and the wind end; things calm down.

You and I will not likely go walking on the back of the sea any time soon. But we most certainly will - or already do - find ourselves in the midst of the storms of life. Jesus can and will walk toward us. Will we trust him enough to leave the security of the boats we have made for ourselves, and instead risk our lives into his command?

Historical background information in this post is drawn primarily from Social-Science Commentary on the Synoptic Gospels, see below, pages 81-82.

22 Immediately he made the disciples get into the boat and go on ahead to the other side, while he dismissed the crowds. 23 And after he had dismissed the crowds, he went up the mountain by himself to pray. When evening came, he was there alone, 24 but by this time the boat, battered by the waves, was far from the land, for the wind was against them. 25 And early in the morning he came walking toward them on the sea. 26 But when the disciples saw him walking on the sea, they were terrified, saying, "It is a ghost!" And they cried out in fear. 27 But immediately Jesus spoke to them and said, "Take heart, it is I; do not be afraid."

28 Peter answered him, "Lord, if it is you, command me to come to you on the water." 29 He said, "Come." So Peter got out of the boat, started walking on the water, and came toward Jesus. 30 But when he noticed the strong wind, he became frightened, and beginning to sink, he cried out, "Lord, save me!" 31 Jesus immediately reached out his hand and caught him, saying to him, "You of little faith, why did you doubt?" 32 When they got into the boat, the wind ceased. 33 And those in the boat worshiped him, saying, "Truly you are the Son of God.

22 As soon as the meal was finished, he insisted that the disciples get in the boat and go on ahead to the other side while he dismissed the people. 23 With the crowd dispersed, he climbed the mountain so he could be by himself and pray. He stayed there alone, late into the night.

24 Meanwhile, the boat was far out to sea when the wind came up against them and they were battered by the waves. 25 At about four o'clock in the morning, Jesus came toward them walking on the water. 26 They were scared out of their wits. "A ghost!" they said, crying out in terror.

28 Peter, suddenly bold, said, "Master, if it's really you, call me to come to you on the water."

Jumping out of the boat, Peter walked on the water to Jesus. 30 But when he looked down at the waves churning beneath his feet, he lost his nerve and started to sink. He cried, "Master, save me!"

31 Jesus didn't hesitate. He reached down and grabbed his hand. Then he said, "Faint-heart, what got into you?"

32 The two of them climbed into the boat, and the wind died down. 33 The disciples in the boat, having watched the whole thing, worshiped Jesus, saying, "This is it! You are God's Son for sure!"