This is a parable about the FIELD - about the collective experience. At the end, the weeds ARE separated and burned. At the end, what is pleasing to God is taken in to God's care and keeping. But remember, think of yourself as the FIELD. At the harvest, the weeds in you are removed, and the wheat in you is gathered in. 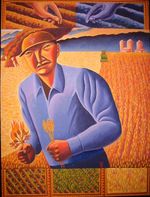 Wheat and weeds together sown

Just as the preceding parable of the Sower had an extravagantly generous (or wasteful?) God giving the Good News even to the hardened, the shallow, and the bristly; this parable now talks about the other reality: it is not just the soils that vary, there are also different kinds of "seeds."

The fact that an enemy would come in the night and sabotage one's livelihood was not unheard of - not a surprise - to Jesus' hearers. A widespread fact of life was generations of feuding between families or other groups.

And while we may no longer experience weeds being placed there by enemies, we still have the widespread experience of something keeping anything from being totally perfect.

No matter how good, pure and perfect to begin, something always happens that takes the bloom off the rose.

First, notice that Jesus does NOT advise taking revenge of the enemy. He does not advise continuing the feud by getting back at the enemy.

Second, notice that Jesus does NOT advise that WE try and make the situation pure and perfect. He rightly points out that OUR trying to makes things perfect will only make things worse.

Third, notice that while the wheat and weed PLANTS can be separated, the ROOTS cannot. Pulling up weed plants will also unavoidably pull up wheat roots.

Fourth, notice that Jesus does NOT call the weeds "wild plants that also have an honoured place in the diversity of God's creation." The weeds will not be gathered into the barn at the harvest.

Fifth, notice that - unlike real life - these weeds do NOT harm the growth of the wheat. It would be a tragic mistake to interpret this parable as toleration of harmful behaviour.

Sixth, it would also be a tragic mistake to interpret this parable as applying to different individuals.

This is a parable about the FIELD - about the collective experience. It should be interpreted as a comment on the collective experience of the whole world; or a whole congregation; or a whole person - in all cases we find an unavoidable, inseparable mixture of good and bad, wheat and weeds together sown. According to this parable, we should expect that to be true; and we should not expect that God is going to come and take out all the bad things and make everything and everyone wholly good and pure. Darn.

Seventh, notice that all is not lost; all is not left muddled and pointless. At the end, the weeds ARE separated and burned. At the end, what is pleasing to God is taken in to God's care and keeping. But remember, think of yourself as the FIELD. At the harvest, the weeds in you are removed, and the wheat in you is gathered in.

Personally, though the work of harvesting is arduous, this sounds like Good News to me.

Most scholars agree that Matthew 13:36-43 are NOT the words of Jesus, but an interpretation added by the early Christian community. If you think you can count yourself amongst the wheat, it is a great passage for beating up on those you consider to be amongst the weeds. But I'm not sure what the Good News of that is.

Historical background information in this post is drawn primarily from Social-Science Commentary on the Synoptic Gospels, see below, pages 75-77.

24 He put before them another parable: "The kingdom of heaven may be compared to someone who sowed good seed in his field; 25 but while everybody was asleep, an enemy came and sowed weeds among the wheat, and then went away. 26 So when the plants came up and bore grain, then the weeds appeared as well. 27 And the slaves of the householder came and said to him, 'Master, did you not sow good seed in your field? Where, then, did these weeds come from?' 28 He answered, 'An enemy has done this.' The slaves said to him, 'Then do you want us to go and gather them?' 29 But he replied, 'No; for in gathering the weeds you would uproot the wheat along with them. 30 Let both of them grow together until the harvest; and at harvest time I will tell the reapers, Collect the weeds first and bind them in bundles to be burned, but gather the wheat into my barn.'"

36 Then he left the crowds and went into the house. And his disciples approached him, saying, "Explain to us the parable of the weeds of the field." 37 He answered, "The one who sows the good seed is the Son of Man; 38 the field is the world, and the good seed are the children of the kingdom; the weeds are the children of the evil one, 39 and the enemy who sowed them is the devil; the harvest is the end of the age, and the reapers are angels. 40 Just as the weeds are collected and burned up with fire, so will it be at the end of the age. 41 The Son of Man will send his angels, and they will collect out of his kingdom all causes of sin and all evildoers, 42 and they will throw them into the furnace of fire, where there will be weeping and gnashing of teeth. 43 Then the righteous will shine like the sun in the kingdom of their Father. Let anyone with ears listen!

24 He told another story. "God's kingdom is like a farmer who planted good seed in his field. 25 That night, while his hired men were asleep, his enemy sowed thistles all through the wheat and slipped away before dawn. 26 When the first green shoots appeared and the grain began to form, the thistles showed up, too.

27 "The farmhands came to the farmer and said, 'Master, that was clean seed you planted, wasn't it? Where did these thistles come from?'

"The farmhands asked, 'Should we weed out the thistles?'

29 "He said, 'No, if you weed the thistles, you'll pull up the wheat, too. 30 Let them grow together until harvest time. Then I'll instruct the harvesters to pull up the thistles and tie them in bundles for the fire, then gather the wheat and put it in the barn.' "

36 Jesus dismissed the congregation and went into the house. His disciples came in and said, "Explain to us that story of the thistles in the field."

40 "The picture of thistles pulled up and burned is a scene from the final act. 41 The Son of Man will send his angels, weed out the thistles from his kingdom, 42 pitch them in the trash, and be done with them. They are going to complain to high heaven, but nobody is going to listen. 43 At the same time, ripe, holy lives will mature and adorn the kingdom of their Father.

"Are you listening to this? Really listening?"