To deny the physicality of the resurrection is to deny that God vindicated the words and deeds of Jesus which are embodied in his flesh. 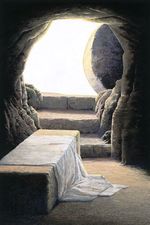 See the place where he lay

Sermon by the Rev. Dr. George Hermanson, "A Covenant Of Compassion."

A good sermon or bible study of this lesson will have to begin by looking back to Matthew 27:55-66, and reading forward to Matthew 28:11-15.

Doing this will help you realize that between Mary Magdalene and the other Mary, and the guards posted at the tomb, we can be sure that there is absolutely trustworthy, continuous, eye-witness evidence that:

So what? So why is this such Good News?

In order to really get the Good News of Easter, it is important to get our hearts and minds focused on who brutally degraded and killed Jesus, and why they did that.

Well. Let's suppose Jesus had lived a long and happy life and died peacefully in his sleep surrounded by loved ones. If he had then been resurrected on the third day, that would be pretty good news. We could still preach sermons about "Love Is Stronger Than Death." Which is for sure true. And most days is good enough news for me.

Or. Let's suppose that some ordinary person - say, Mary Magdalene - was resurrected. Same thing as before. "Love Is Stronger Than Death." Still is good enough news.

But suppose we learned that someone truly bad - say, Adolf Hitler - was resurrected. Wow! Not such good news. In this case I'd rather that death was a permanent condition.

But if we focus our hearts and minds on the fact that it was Jesus who was resurrected, and that he was resurrected after being brutally degraded and executed by the Romans, then the truly Good News becomes clear.

You see, the Romans killed lots of people. Often right on the spot; no muss, no fuss.

No time consuming, expensive trial, flogging, mocking, marching off to Golgotha, stripping naked, nailing to a cross, more mocking and taunting, poking with a spear to make sure he's really dead.

Why the showy death for Jesus?

Normally, Jesus' dead body would be left on the cross to rot a bit; maybe be eaten by scavenging birds and animals; be reduced to a no body; and then be thrown into a mass grave to fade from memory.

But Joseph of Arimathea was able to get a personal favour from Pilate (probably at great personal expense). And Joseph was able to retrieve Jesus' body from the ignominy of the cross and return it to the framework of beloved relationships; keeping the identity of the body intact; giving the body a proper burial in anticipation of the general resurrection when God would raise all the saints.

But then another unusual thing happened.

You see, at the time of Jesus, it was believed that the flesh of a person contained all their deeds - good and bad. And that after death, the body had to undergo a year-long purification as the evil deeds in the flesh rotted away; leaving only the bones which contained the personality of the person. God would then use the bones to knit a new "resurrected" body for the life to come. It was also believed that this process began on the fourth day. (Recall that Jesus calls Lazarus to come from his tomb on the fourth day. Lazarus' body has begun the process and now stinks.)

But before Jesus' flesh could begin to rot, God interrupts this process and raises Jesus.

What does this mean?

It means that the flesh of Jesus - Jesus' words and deeds - needed no purification. They already were pure.

Jesus' words and deeds are true and trustworthy.

It also means that God has overturned the Roman mortification of Jesus' flesh.

The Romans tried to erase Jesus' words and deeds from the face of the earth forever. But God raised Jesus to resurrected-life here on earth.

This is why the New Testament consistently insists on the physicality of the resurrection.

To deny the physicality of the resurrection is to deny that God vindicated the words and deeds of Jesus which are embodied in his flesh.

Now let's not get all modern, and scientific, and silly here. Nowhere does the New Testament claim that the same flesh that was flogged and killed by the Romans, and buried in a tomb, is the "flesh" of the resurrected body.

We can't say for sure what a "resurrected body" is because there is no earthly equivalent. "Resurrected bodies" are for the life to come, not this life.

So the Jesus who died on Good Friday - that flesh - is still dead on Easter Sunday.

But the words and deeds that were in the flesh of the Jesus who died on Good Friday?

Ah! The embodied words and deeds of Jesus - THOSE are really, actually, factually alive on Easter Sunday.

The worst that Rome could do was not able to kill Jesus' words and deeds.

They are true and trustworthy.

This is the really Good News of Easter.

Historical background information in this post is drawn primarily from Social-Science Commentary on the Synoptic Gospels, see link below, pages 140-141.

1 After the sabbath, as the first day of the week was dawning, Mary Magdalene and the other Mary went to see the tomb. 2 And suddenly there was a great earthquake; for an angel of the Lord, descending from heaven, came and rolled back the stone and sat on it. 3 His appearance was like lightning, and his clothing white as snow. 4 For fear of him the guards shook and became like dead men. 5 But the angel said to the women, "Do not be afraid; I know that you are looking for Jesus who was crucified. 6 He is not here; for he has been raised, as he said. Come, see the place where he lay. 7 Then go quickly and tell his disciples, 'He has been raised from the dead, and indeed he is going ahead of you to Galilee; there you will see him.' This is my message for you." 8 So they left the tomb quickly with fear and great joy, and ran to tell his disciples. 9 Suddenly Jesus met them and said, "Greetings!" And they came to him, took hold of his feet, and worshiped him. 10 Then Jesus said to them, "Do not be afraid; go and tell my brothers to go to Galilee; there they will see me."

1 After the Sabbath, as the first light of the new week dawned, Mary Magdalene and the other Mary came to keep vigil at the tomb. 2 Suddenly the earth reeled and rocked under their feet as God's angel came down from heaven, came right up to where they were standing. He rolled back the stone and then sat on it. 3 Shafts of lightning blazed from him. His garments shimmered snow-white. 4 The guards at the tomb were scared to death. They were so frightened, they couldn't move.

5 The angel spoke to the women: "There is nothing to fear here. I know you're looking for Jesus, the One they nailed to the cross. 6 He is not here. He was raised, just as he said. Come and look at the place where he was placed.

7 "Now, get on your way quickly and tell his disciples, 'He is risen from the dead. He is going on ahead of you to Galilee. You will see him there.' That's the message."

8 The women, deep in wonder and full of joy, lost no time in leaving the tomb. They ran to tell the disciples. 9 Then Jesus met them, stopping them in their tracks. "Good morning!" he said. They fell to their knees, embraced his feet, and worshiped him. 10 Jesus said, "You're holding on to me for dear life! Don't be frightened like that. Go tell my brothers that they are to go to Galilee, and that I'll meet them there."