In this lesson - and in the Last Supper - breaking bread is an act of companionship and solidarity; of loyalty and friendship; of mutuality and sharing. Jesus-now-resurrected still appears to people in mystical visions. These are unique, individual experiences. But all of us can still recognize Jesus-now-resurrected in quite ordinary, everyday ways. Anyone here got some bread? Let's give thanks, break it, share it, and see what happens. 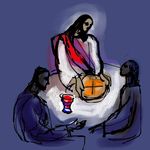 Remember that this is the first experience of Jesus-now-resurrected in Luke.

In Luke, the tomb is discovered empty on Sunday morning by the women, but Jesus does not appear to his followers.

The two then return to Jerusalem and tell the others, and then Jesus-now-resurrected appears to the gathered group of his followers.

Now sometimes, modern day sophisticates talk about folks in the Bible as if they were merely uneducated, gullible, bumpkins who unquestioningly accepted any super-natural hocus-pocus.

But listen to their reactions to the resurrection events as interpreted by various translations (and note how the translators sometimes struggle to capture the full sense of the underlying Greek):

These are not the reactions of bumpkins.

In fact, like societies today in which "paranormal" experiences are still considered normal, the followers of Jesus were quite sophisticated in distinguishing different types of nonstandard experiences.

The details reported in Luke make it very clear that it was the same Jesus that was crucified that is now resurrected (see the wounds, Luke 24:39); and what they are seeing is not a ghost (eating before their eyes, Luke 24:43).

One can almost hear the first witnesses of the resurrection patiently explaining to their incredulous friends and family:

But that emphasis on brokenness loses sight of the bread.

In this lesson - and in the Last Supper - breaking bread is an act of companionship and solidarity; of loyalty and friendship; of mutuality and sharing.

Jesus-now-resurrected still appears to people in mystical visions. These are unique, individual experiences.

But all of us can still recognize Jesus-now-resurrected in quite ordinary, everyday ways.

Anyone here got some bread? Let's give thanks, break it, share it, and see what happens.

13 Now on that same day two of them were going to a village called Emmaus, about seven miles from Jerusalem, 14 and talking with each other about all these things that had happened. 15 While they were talking and discussing, Jesus himself came near and went with them, 16 but their eyes were kept from recognizing him. 17 And he said to them, "What are you discussing with each other while you walk along?" They stood still, looking sad. 18 Then one of them, whose name was Cleopas, answered him, "Are you the only stranger in Jerusalem who does not know the things that have taken place there in these days?" 19 He asked them, "What things?" They replied, "The things about Jesus of Nazareth, who was a prophet mighty in deed and word before God and all the people, 20 and how our chief priests and leaders handed him over to be condemned to death and crucified him. 21 But we had hoped that he was the one to redeem Israel. Yes, and besides all this, it is now the third day since these things took place. 22 Moreover, some women of our group astounded us. They were at the tomb early this morning, 23 and when they did not find his body there, they came back and told us that they had indeed seen a vision of angels who said that he was alive. 24 Some of those who were with us went to the tomb and found it just as the women had said; but they did not see him." 25 Then he said to them, "Oh, how foolish you are, and how slow of heart to believe all that the prophets have declared! 26 Was it not necessary that the Messiah should suffer these things and then enter into his glory?" 27 Then beginning with Moses and all the prophets, he interpreted to them the things about himself in all the scriptures.

28 As they came near the village to which they were going, he walked ahead as if he were going on. 29 But they urged him strongly, saying, "Stay with us, because it is almost evening and the day is now nearly over." So he went in to stay with them. 30 When he was at the table with them, he took bread, blessed and broke it, and gave it to them. 31 Then their eyes were opened, and they recognized him; and he vanished from their sight. 32 They said to each other, "Were not our hearts burning within us while he was talking to us on the road, while he was opening the scriptures to us?" 33 That same hour they got up and returned to Jerusalem; and they found the eleven and their companions gathered together. 34 They were saying, "The Lord has risen indeed, and he has appeared to Simon!" 35 Then they told what had happened on the road, and how he had been made known to them in the breaking of the bread.

13 That same day two of them were walking to the village Emmaus, about seven miles out of Jerusalem. 14 They were deep in conversation, going over all these things that had happened. 15 In the middle of their talk and questions, Jesus came up and walked along with them. 16 But they were not able to recognize who he was.

17 He asked, "What's this you're discussing so intently as you walk along?"

They just stood there, long-faced, like they had lost their best friend. 18 Then one of them, his name was Cleopas, said, "Are you the only one in Jerusalem who hasn't heard what's happened during the last few days?"

They said, "The things that happened to Jesus the Nazarene. He was a man of God, a prophet, dynamic in work and word, blessed by both God and all the people. 20 Then our high priests and leaders betrayed him, got him sentenced to death, and crucified him. 21 And we had our hopes up that he was the One, the One about to deliver Israel. And it is now the third day since it happened. 22 But now some of our women have completely confused us. Early this morning they were at the tomb 23 and couldn't find his body. They came back with the story that they had seen a vision of angels who said he was alive. 24 Some of our friends went off to the tomb to check and found it empty just as the women said, but they didn't see Jesus."

25 Then he said to them, "So thick-headed! So slow-hearted! Why can't you simply believe all that the prophets said? 26 Don't you see that these things had to happen, that the Messiah had to suffer and only then enter into his glory?" 27 Then he started at the beginning, with the Books of Moses, and went on through all the Prophets, pointing out everything in the Scriptures that referred to him.

28 They came to the edge of the village where they were headed. He acted as if he were going on 29 but they pressed him: "Stay and have supper with us. It's nearly evening; the day is done." So he went in with them. 30 And here is what happened: He sat down at the table with them. Taking the bread, he blessed and broke and gave it to them. 31 At that moment, open-eyed, wide-eyed, they recognized him. And then he disappeared.

32 Back and forth they talked. "Didn't we feel on fire as he conversed with us on the road, as he opened up the Scriptures for us?"

33 They didn't waste a minute. They were up and on their way back to Jerusalem. They found the Eleven and their friends gathered together, 34 talking away: "It's really happened! The Master has been raised up—Simon saw him!"

35 Then the two went over everything that happened on the road and how they recognized him when he broke the bread.