John doesn't care what we see with our eyeballs. He wants us to SEE with our inner eye who Jesus really is. That is why he has written these signs for us. That in SEEing, we might believe; and in believing, we might have the life that is in Jesus. 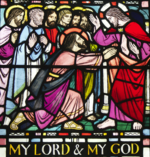 Reach out your hand and put it in my side

Verses 30-31 (NRSV) state the purpose for which John has written this Gospel.

Note the direct address to YOU, the reader.

But these are written so that YOU ...

John is not writing an abstract treatise for whoever may happen to come upon it. He is writing with a very specific audience in mind. Namely, those second and third generation believers who are under-going severe persecution at the hands of the current Roman Emperor. (And, now, also to you and me.)

The first is that "believe" in John is better translated as "believe into." In John, "believe" does NOT mean "hold an opinion about." "Believe" means "trust," "bond with," "be loyal to." Think, "I am the vine and you are the branches." That is what "believe" means.

In either case, it is important to note that "believe" is not the end product. The crucial thing is that:

through believing, you may have life in his name.

That is, the questions we must be asking ourselves as we consider the various signs that John has chosen to write down for us are:

How does this help me to have life?

And not just any old sort of life, but the life that is in Jesus - in his name?

These are the questions to ask of the whole Gospel, and today, of Verses 19-29.

But to begin again with a personal aside ... If you feel anxious or uncertain about talking calmly and matter-of-factly about these appearances of the now-resurrected-Jesus, try reading this note about why we in the Western world have so much trouble with "spiritual" realities; or this one about not letting current science be the sole arbitrator of what is really real.

And now to begin with the beginning ...

Whereas in his appearance to Mary, Jesus could not be touched because he was in the process of ascending to his Father (John 20:17), this process is completed by the evening, and Jesus-now-resurrected descends from his Father to appear to the disciples.

Verses 19 and 26. The Galilean disciples are behind locked doors in fear that the Judean authorities (not "the Jews") are seeking to have them arrested. The authorities were trying to obliterate Jesus and his "movement." The authorities would most certainly act against this group if they were found out.

Just as Jesus had spoken of these things at the Last Supper (John 14 and following), Jesus-now-resurrected performs 3 actions:

The latter is significant for the followers of Jesus because it replaces the Temple and sin offerings as the location and means for reconciliation with God and fellow believers.

But Thomas is not with the others. Where is Thomas? Christian Schwarz, The 3 Colors of Ministry, makes an interesting observation that while Thomas' doubting has the constructive effect of providing the occasion for deepening Jesus' teaching; it also has the negative effect of weakening Thomas' bonding with his compatriots.

Notice that in Verse 25, the disciples echo the testimony first given by Mary Magdalene, "I have seen the Lord." It is this acknowledgement / acclamation that Thomas also uses later when Jesus-now-resurrected appears to him: "My Lord."

Notice that though Jesus says to Thomas, "Put your finger here," the text does not actually say that Thomas did indeed touch Jesus. Instead, the response of Thomas is to the last instruction from Jesus, "Do not doubt but believe." (And see above about "believe.")

But that is the whole point John tries to make throughout the whole Gospel.

John doesn't care what we see with our eyeballs.

He wants us to SEE with our inner eye who Jesus really is.

That is why he has written these signs for us. That in SEEing, we might trust; and in trusting, we might have the life that is in Jesus.

Do you have the life that is in Jesus? Can you see it? Feel it? Know it? Glimpse it? Sense it? Walk in it? Trust it? Then you have been blessed. Bring that blessing to the world that is seen with eyeballs.

Note: Historical background information in this post is drawn primarily from Bruce Malina and Richard Rohrbaugh, Social-Science Commentary on the Gospel of John, pages 281-286; and the writings of Amy-Jill Levine, et. al. See link below.

19 When it was evening on that day, the first day of the week, and the doors of the house where the disciples had met were locked for fear of the Jews, Jesus came and stood among them and said, "Peace be with you." 20 After he said this, he showed them his hands and his side. Then the disciples rejoiced when they saw the Lord. 21 Jesus said to them again, "Peace be with you. As the Father has sent me, so I send you." 22 When he had said this, he breathed on them and said to them, "Receive the Holy Spirit. 23 If you forgive the sins of any, they are forgiven them; if you retain the sins of any, they are retained."

24 But Thomas (who was called the Twin), one of the twelve, was not with them when Jesus came. 25 So the other disciples told him, "We have seen the Lord." But he said to them, "Unless I see the mark of the nails in his hands, and put my finger in the mark of the nails and my hand in his side, I will not believe."

26 A week later his disciples were again in the house, and Thomas was with them. Although the doors were shut, Jesus came and stood among them and said, "Peace be with you." 27 Then he said to Thomas, "Put your finger here and see my hands. Reach out your hand and put it in my side. Do not doubt but believe." 28 Thomas answered him, "My Lord and my God!" 29 Jesus said to him, "Have you believed because you have seen me? Blessed are those who have not seen and yet have come to believe."

30 Now Jesus did many other signs in the presence of his disciples, which are not written in this book. 31 But these are written so that you may come to believe that Jesus is the Messiah, the Son of God, and that through believing you may have life in his name.

19 Later on that day, the disciples had gathered together, but, fearful of the Jews, had locked all the doors in the house. Jesus entered, stood among them, and said, "Peace to you." 20 Then he showed them his hands and side.

The disciples, seeing the Master with their own eyes, were exuberant. 21 Jesus repeated his greeting: "Peace to you. Just as the Father sent me, I send you."

22 Then he took a deep breath and breathed into them. "Receive the Holy Spirit," he said. 23 "If you forgive someone's sins, they're gone for good. If you don't forgive sins, what are you going to do with them?"

24 But Thomas, sometimes called the Twin, one of the Twelve, was not with them when Jesus came. 25 The other disciples told him, "We saw the Master."

But he said, "Unless I see the nail holes in his hands, put my finger in the nail holes, and stick my hand in his side, I won't believe it."

26 Eight days later, his disciples were again in the room. This time Thomas was with them. Jesus came through the locked doors, stood among them, and said, "Peace to you."

27 Then he focused his attention on Thomas. "Take your finger and examine my hands. Take your hand and stick it in my side. Don't be unbelieving. Believe."

29 Jesus said, "So, you believe because you've seen with your own eyes. Even better blessings are in store for those who believe without seeing."

30 Jesus provided far more God-revealing signs than are written down in this book. 31 These are written down so you will believe that Jesus is the Messiah, the Son of God, and in the act of believing, have real and eternal life in the way he personally revealed it.