Many voices call our name. Can we be like the good sheep in this lesson and recognize and respond to the voice of Jesus calling our name? 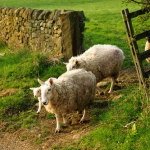 I am the gate

Sermon by the Rev. Dr. George Hermanson, "Back To The Shepherd (Redux)."

This passage uses actual life experiences that would have been very familiar to Jesus' followers - the care of sheep.

The use of "shepherd" was also widely and well established as an positive image to describe the role of God, kings, Moses, and other leaders in their care of the people. (Who are consequently also described as being like sheep - sometimes not so positively!)

Paradoxically, actual shepherds were scorned and believed to be untrustworthy and dishonourable:

Nonetheless, in Mediterranean culture, "a good shepherd" was an honourable way to describe a "a good leader."

This passage is full of details about the actual care of sheep:

Jesus is the passageway - the boundary transition point - through whom we are able to find abundant life. In this context, "abundant life" does not mean "lots of toys." It refers to the quality of life that comes through attachment to Jesus - believing / trusting into Jesus; abiding in Jesus; eternal life.

Many voices call our name. Can we be like the good sheep in this lesson and recognize and respond to the voice of Jesus calling our name?

Historical background information in this post is drawn primarily from Social-Science Commentary on the Gospel of John, see link below, pages 179-180.

1 "Very truly, I tell you, anyone who does not enter the sheepfold by the gate but climbs in by another way is a thief and a bandit. 2 The one who enters by the gate is the shepherd of the sheep. 3 The gatekeeper opens the gate for him, and the sheep hear his voice. He calls his own sheep by name and leads them out. 4 When he has brought out all his own, he goes ahead of them, and the sheep follow him because they know his voice. 5 They will not follow a stranger, but they will run from him because they do not know the voice of strangers." 6 Jesus used this figure of speech with them, but they did not understand what he was saying to them.

7 So again Jesus said to them, "Very truly, I tell you, I am the gate for the sheep. 8 All who came before me are thieves and bandits; but the sheep did not listen to them. 9 I am the gate. Whoever enters by me will be saved, and will come in and go out and find pasture. 10 The thief comes only to steal and kill and destroy. I came that they may have life, and have it abundantly.

1 "Let me set this before you as plainly as I can. If a person climbs over or through the fence of a sheep pen instead of going through the gate, you know he's up to no good—a sheep rustler! 2 The shepherd walks right up to the gate. 3 The gatekeeper opens the gate to him and the sheep recognize his voice. He calls his own sheep by name and leads them out. 4 When he gets them all out, he leads them and they follow because they are familiar with his voice. 5 They won't follow a stranger's voice but will scatter because they aren't used to the sound of it."

6 Jesus told this simple story, but they had no idea what he was talking about. 7 So he tried again. "I'll be explicit, then. I am the Gate for the sheep. 8 All those others are up to no good—sheep stealers, every one of them. But the sheep didn't listen to them. 9 I am the Gate. Anyone who goes through me will be cared for—will freely go in and out, and find pasture. 10 A thief is only there to steal and kill and destroy. I came so they can have real and eternal life, more and better life than they ever dreamed of.