I wonder how much in our heart of hearts, we are still cheering for Jesus as the triumphant Victor, and still longing for a Messiah, when God has already given us all that God has to give: the Beloved? 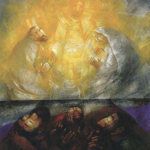 
Year A
Transfiguration Sunday
February 19, 2023
Last Sunday of the Season of Epiphany
The Sunday Before Ash Wednesday
May be as early as February 1 or as late as March 7 Inclusive

Verse 1. "Six days later" means 6 days after first telling his disciples (in the preceding verses at the end of Chapter 16) that he must go to Jerusalem and be crucified. Eugene Peterson in his Bible translation, The Message, makes an interesting connection between the last verse of that passage in Chapter 16 and the first verse of this one which begins Chapter 17:

Truly I tell you, there are some standing here who will not taste death before they see the Son of Man coming in his Kingdom.
Matthew 16:28, NRSV

Six days later, three of them saw that glory.
Matthew 17:1, The Message

Jesus selects Peter, James, and John to accompany him. He leads them up a high mountain. Although unnamed and unstated, a "high mountain" is a "thin place," a place that is close to the spiritual realm, a place for sacred encounters.

There is more to be known about what is really real than the eye can see.

If you don't believe that try telling someone you love what is lovely about them by only telling them what your eyes can see.

So instead of focusing on the special effects, focus instead on the relationships: Who is present? Who are they? What is their history? Who do they represent or stand for? What do people say to and do with each other?

Elijah and Moses represent the Prophets and the Law. Their talking with Jesus would signify the high spiritual status of Jesus.

Because Elijah was lifted up into the heavens before his physical death, he is still looked to by Jews today as a fore-runner of the Messiah.

Why does Peter offer to build three dwelling places? Frankly, I have not found a plausible historical suggestion for this.

The title, "my Son, the Beloved," was earlier heard by Jesus at his baptism as a voice coming from heaven while he was praying. (Matthew 3:17)

It is now confirmed to Peter, James and John by a voice coming from a cloud. They are also instructed to "Listen to him," which suggests that Jesus is of higher status than Elijah and Moses.

The voice from the cloud would be understood to be the direct voice of God speaking. Just as in Luke 5:8, where Peter falls down and urges Jesus to "Go away from me Lord, for I am a sinful man," so too here the disciples are deeply aware of their mortal unworthiness to be so much as even hearing God's own voice. Thus they fall to the ground - as an act of humility; and are afraid - because they are unworthy to be in the presence of One so much more exalted than they.

The action of physically touching the disciples re-affirms Jesus' bond with them, his words, "Do not be afraid," assures them that because of his bond with them they are worthy to be in the presence of God. This also brings the mystical experience to a close.

See the latter part of my Introduction to John for an explanation of why Peter, James and John told no one about what they had seen until after Jesus' resurrection.

The Transfiguration is an apt Preface to Lent and Jesus' journey to Jerusalem, because what lies ahead is a confrontation between the non-violent way of the Beloved versus the hoped-for victory by the Messiah. The crowds at Jerusalem will be cheering for "the one who is bringing the Kingdom of our ancestor David." This is not the same as welcoming God's Beloved.

I wonder how much in our heart of hearts, we are still cheering for Jesus as the triumphant Victor, and still longing for a Messiah, when God has already given us all that God has to give: the Beloved?

Note: Historical background information in this post is drawn primarily from Bruce Malina and Richard Rohrbaugh, Social-Science Commentary on the Synoptic Gospels, page 89; and the writings of Amy-Jill Levine, et. al. See below.

1 Six days later, Jesus took with him Peter and James and his brother John and led them up a high mountain, by themselves. 2 And he was transfigured before them, and his face shone like the sun, and his clothes became dazzling white. 3 Suddenly there appeared to them Moses and Elijah, talking with him. 4 Then Peter said to Jesus, "Lord, it is good for us to be here; if you wish, I will make three dwellings here, one for you, one for Moses, and one for Elijah." 5 While he was still speaking, suddenly a bright cloud overshadowed them, and from the cloud a voice said, "This is my Son, the Beloved; with him I am well pleased; listen to him!" 6 When the disciples heard this, they fell to the ground and were overcome by fear. 7 But Jesus came and touched them, saying, "Get up and do not be afraid."
8 And when they looked up, they saw no one except Jesus himself alone.

9 As they were coming down the mountain, Jesus ordered them, "Tell no one about the vision until after the Son of Man has been raised from the dead.".

1 Six days later, three of them saw that glory. Jesus took Peter and the brothers, James and John, and led them up a high mountain. 2 His appearance changed from the inside out, right before their eyes. Sunlight poured from his face. His clothes were filled with light. 3 Then they realized that Moses and Elijah were also there in deep conversation with him.

4 Peter broke in, "Master, this is a great moment! What would you think if I built three memorials here on the mountain—one for you, one for Moses, one for Elijah?"

5 While he was going on like this, babbling, a light-radiant cloud enveloped them, and sounding from deep in the cloud a voice: "This is my Son, marked by my love, focus of my delight. Listen to him."

6 When the disciples heard it, they fell flat on their faces, scared to death. 7 But Jesus came over and touched them. "Don't be afraid." 8 When they opened their eyes and looked around all they saw was Jesus, only Jesus.

9 Coming down the mountain, Jesus swore them to secrecy. "Don't breathe a word of what you've seen. After the Son of Man is raised from the dead, you are free to talk.".

"Why does Peter offer to build three dwelling places? Frankly, I have not found a plausible historical suggestion for this."
Mark and Luke stated that Peter was babbling, But Matthew doesn't. That is because Matthew had a Jewish background; Mark and Luke didn't.
There is a simple explanation to Peter's comment about booths. It was about six months before the Crucifixion and it was during Sukkot, The Feast of Tabernacles. Sukkot is the Hebrew word for tents, booths, and tabernacles. Jews today still build temporary shelters in their backyards and live in them for seven days.
Not only that but the Jews since Zechariah's day have pointed to Zechariah, chapter 14, as proof that the Messiah will come during Sukkot. Peter thought that Jesus was finally revealing himself as the Messiah, and the only thing he could think of was erecting three sukkah.
BTW, Messianic Jews, because of this prophesy in Zechariah, believe that Christmas takes place during Sukkot. And that Jesus was conceived during Chanukah, when they celebrate Light invading darkness.
Hope this sheds some light (pun intended) on Peter's babbling.

I want to reinforce David's point for we have a problem with liberal theology (and I say this as one whose tradition comes out of liberal theology but is process/relational theology) is that too many are informed by what is called scientific naturalism - which is atheistic - Of course scientific naturalism does not need to be atheistic but it is how many work, including clergy. William James talks about deep empiricism as a way to see the thin places where we can experience the aim of God. David is calling us to keep open space where we can experience the reality of God and our preaching ought do that.

Hi John, I realize that there are many scientists who do believe in God and many who are talking about God within their scientific framework. My comment about CLASSIC modern science though still stands - the whole scientific method is based on the presumption that there is no God actively present in any way that could possibly be measured or be having any impact on observed results. Results must be explained ONLY by referencing various material laws and constants.

We're not really in any disagreemnet I believe.

My post about science in the pulpit is just that too many of my liberal colleagues get spooked by the Bible's "miracles" because they are not "scientific."

I want us to be bold - and rational - and not give "science" the sole authority to determine what is really real.

Modern science most certainly does not reject any talk of God. Some scientists do. Just as some fundamentalists reject science. But they are the exceptions. Check out www.ordainedscientists.org