The command / invitation to Peter, Andrew, James and John to "Come, follow me," is not: "I wonder if you would consider the possibility of tagging along if you have the time, and it's not too inconvenient." 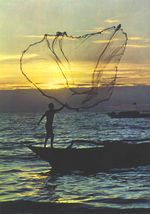 Having interrupted readings from Matthew for Epiphany and Baptism by skipping over to John last Sunday, we are back at Matthew this week. But the skipping has omitted the story of Jesus' testing / tempting (this will be told in a few more weeks on the first Sunday of Lent). Instead, we repeat the calling of the first disciples.

Matthew 4:12-17, establishes Jesus as the successor of John the Baptist. We learn that John has been arrested, and Jesus has "withdrawn" - or fled; probably to avoid being arrested himself. He returns to Galilee at first, and then moves to Capernaum - once again fulfilling a prophetic text, Isaiah 9:1-2.

Matthew 4:17 is a direct quote of John the Baptist's proclamation, 3:1

From this time, Jesus began to proclaim,
"Repent, for the Kingdom of heaven
has come near (or, is at hand)."

The only problem with this is that in fact, from this point on, Matthew never reports Jesus as actually calling on people to repent! And "the Kingdom of heaven has come near" only occurs one more time when Jesus instructs the 12 to go out on their own (Matthew 10:7).

Bruce Malina and Richard Rohrbaugh (See footnote below.) dismiss modern interpretations of this passage as being about "final judgment," or "the end times."

Jesus, and his followers / hearers would have understood "has come near" as quite literally "what will happen next."

The fact that the Kingdom of heaven did not happen next was the first crisis of faith Jesus' followers experienced after his execution. Their re-interpretation of how "has come near" is true in the life, execution, death and resurrection of Jesus was a bold act of imagination and re-invention of the world.

The command / invitation to Peter, Andrew, James and John to "Come, follow me," is not:

I wonder if you would consider the possibility of tagging along if you have the time, and it's not too inconvenient.

Leaving of fathers and fishing establishes a new set of kinship relationships: with Jesus and his other followers; and a new occupation: as recruiters of others to the Way of Jesus.

Verse 4:23 provides a summary of Jesus' ministry which Matthew will report in more detail in the following chapters:

For modern hearers of this story (as it also was beginning with the second and third generation of followers) there are a number of challenges:

In other words, as people with jobs and mortgages and kids and aging parents and pets, just exactly how do we "Come, and follow?"

Historical background information in this post is drawn primarily from Social-Science Commentary on the Synoptic Gospels, see link below, pages 37-39.

12 Now when Jesus heard that John had been arrested, he withdrew to Galilee. 13 He left Nazareth and made his home in Capernaum by the sea, in the territory of Zebulun and Naphtali, 14 so that what had been spoken through the prophet Isaiah might be fulfilled:

15 "Land of Zebulun, land of Naphtali,
on the road by the sea, across the Jordan,
Galilee of the Gentiles—
16 the people who sat in darkness
have seen a great light,
and for those who sat
in the region and shadow of death
light has dawned."

17 From that time Jesus began to proclaim, "Repent, for the kingdom of heaven has come near."

18 As he walked by the Sea of Galilee, he saw two brothers, Simon, who is called Peter, and Andrew his brother, casting a net into the sea—for they were fishermen. 19 And he said to them, "Follow me, and I will make you fish for people." 20 Immediately they left their nets and followed him. 21 As he went from there, he saw two other brothers, James son of Zebedee and his brother John, in the boat with their father Zebedee, mending their nets, and he called them. 22 Immediately they left the boat and their father, and followed him.

23 Jesus went throughout Galilee, teaching in their synagogues and proclaiming the good news of the kingdom and curing every disease and every sickness among the people.

12 When Jesus got word that John had been arrested, he returned to Galilee. 13 He moved from his hometown, Nazareth, to the lakeside village Capernaum, nestled at the base of the Zebulun and Naphtali hills. 14 This move completed Isaiah's sermon:
15 Land of Zebulun, land of Naphtali,
road to the sea, over Jordan,
Galilee, crossroads for the nations.
16 People sitting out their lives in the dark
saw a huge light;
Sitting in that dark, dark country of death,
they watched the sun come up.

17 This Isaiah-prophesied sermon came to life in Galilee the moment Jesus started preaching. He picked up where John left off: "Change your life. God's kingdom is here."

18 Walking along the beach of Lake Galilee, Jesus saw two brothers: Simon (later called Peter) and Andrew. They were fishing, throwing their nets into the lake. It was their regular work. 19 Jesus said to them, "Come with me. I'll make a new kind of fisherman out of you. I'll show you how to catch men and women instead of perch and bass." 20 They didn't ask questions, but simply dropped their nets and followed.

21 A short distance down the beach they came upon another pair of brothers, James and John, Zebedee's sons. These two were sitting in a boat with their father, Zebedee, mending their fishnets. Jesus made the same offer to them, 22 and they were just as quick to follow, abandoning boat and father.

23 From there he went all over Galilee. He used synagogues for meeting places and taught people the truth of God. God's kingdom was his theme—that beginning right now they were under God's government, a good government! He also healed people of their diseases and of the bad effects of their bad lives.