Joseph was indeed righteous. But more importantly, he was merciful, faithful, and courageous. He chose relationships instead of self-righteousness. 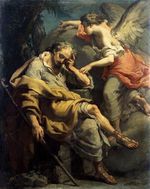 An angel appeared in a dream

Sermon by The Rev. Dr. George Hermanson, "Now A Good Word For Joseph."

Verse 18. "Engaged" is misleading. Mary and Joseph have been betrothed - that is, solemnly contracted by their families to be married at some later date.

"She was found to be with child" is a curious use of the passive voice. Who has done the finding? The text gives no indication.

The fact that Mary is pregnant before she and Joseph have married is shameful in the extreme - both for Mary and her family.

However, that the child is "from the Holy Spirit" confuses the situation since that is a great honour.

In hindsight, it is the honour that has won the day. But, at the time, and in the actual circumstance, it is Mary's shame that guides Joseph's initial response.

(Aside. It is somewhat curious that it is Joseph who is acting here and not his family. Normally, marriages are pre-arranged by the parents. And so, it would normally be the families that would end a betrothal. For whatever reasons, the duty to act has fallen to Joseph alone.)

Verse 19. This verse gives us a glimpse into the character of Joseph. Joseph is both righteous and merciful.

His righteousness is shown in that he gives up his right to marriage with Mary in order that the father of the child might claim it as his own by marrying her.

His mercy is shown in that he intends to do this "quietly," that is, with as little public gossip as possible.

Verse 20. "An angel of the Lord." Note that in Matthew's telling of the birth, humans learn of God's plans from angel messengers, comets (the moving star), visions and dreams. However,

When the public activity of Jesus begins ..., he becomes the source of information about what God wants of people.
Bruce Malina and Richard Rohrbaugh, Social Science Commentary on the Synoptic Gospels, page 26."

"Conceived in her" is misleading. We now know that babies are conceived by the fertilization of an egg from the woman with sperm from the man.

However, at the time of Mary (and up until quite recently), it was understood that women played no role in conception.

The male - in this case the Holy Spirit - placed a human seed into the woman. And even this image is misleading since it was believed that the "seed" was actually a very small version of the later child - there was no understanding of foetal development within the womb. It is an anachronism to imagine that Jesus is half-human (from Mary's egg) and half-divine (from the Holy Spirit's sperm).

Verse 24. We've already been told that Joseph is righteous and acts with mercy. Now we see that Joseph is also faithful. When he awakes, he does what the angel of the Lord had commanded him. It should not be taken for granted that everyone always did what God commanded. (Consider how much the Ten Commandments are followed, even by professing Christians.)

Verse 25. Emphasizes that there is no way that Joseph could possibly be the father of Jesus.

1. Matthew tells the story of the birth from Joseph's perspective; Luke from Mary's.

2. Matthew makes no mention of Nazareth until the family returns from exile in Egypt. (Verse 2:23) Thus, Matthew also makes no mention of traveling to Bethlehem. Without Luke's story, we would probably understand that Joseph and Mary lived in Bethlehem and that Jesus was born in their home there.

3. And so, Matthew makes no mention of an "inn" or a manger.

In this brief passage, we see how Joseph is required to step outside of his comfort zone. To move from being righteous and honourable in his own right, to embracing Mary with her child and all the shame and dishonour that would bring.

Joseph was indeed righteous. But more importantly - he was merciful, faithful, and courageous. He chose relationships instead of self-righteousness.

* Link to Amazon.com Bibliography for Bruce Malina, et. al., Social Science Commentary on ... The Synoptic Gospels; The Gospel of John; The Book of Acts; The Letters of Paul; The Book of Revelation; and others.

18 Now the birth of Jesus the Messiah took place in this way. When his mother Mary had been engaged to Joseph, but before they lived together, she was found to be with child from the Holy Spirit. 19 Her husband Joseph, being a righteous man and unwilling to expose her to public disgrace, planned to dismiss her quietly. 20 But just when he had resolved to do this, an angel of the Lord appeared to him in a dream and said, "Joseph, son of David, do not be afraid to take Mary as your wife, for the child conceived in her is from the Holy Spirit. 21 She will bear a son, and you are to name him Jesus, for he will save his people from their sins." 22 All this took place to fulfill what had been spoken by the Lord through the prophet:
23 "Look, the virgin shall conceive and bear a son,
and they shall name him Emmanuel,"
which means, "God is with us." 24 When Joseph awoke from sleep, he did as the angel of the Lord commanded him; he took her as his wife, 25 but had no marital relations with her until she had borne a son; and he named him Jesus.

18 The birth of Jesus took place like this. His mother, Mary, was engaged to be married to Joseph. Before they came to the marriage bed, Joseph discovered she was pregnant. (It was by the Holy Spirit, but he didn't know that.) 19 Joseph, chagrined but noble, determined to take care of things quietly so Mary would not be disgraced.

20 While he was trying to figure a way out, he had a dream. God's angel spoke in the dream: "Joseph, son of David, don't hesitate to get married. Mary's pregnancy is Spirit-conceived. God's Holy Spirit has made her pregnant. 21 She will bring a son to birth, and when she does, you, Joseph, will name him Jesus—'God saves'—because he will save his people from their sins." 22 This would bring the prophet's embryonic sermon to full term:

23 Watch for this—a virgin will get pregnant and bear a son;
They will name him Emmanuel (Hebrew for "God is with us").

24 Then Joseph woke up. He did exactly what God's angel commanded in the dream: He married Mary. 25 But he did not consummate the marriage until she had the baby. He named the baby Jesus.

Posted at 05:18 PM in Advent-Christmas, Year A | Permalink