One possible moral of this story is to realize that salvation does not require, nor result in, perfection. Salvation in this lifetime is a process - the healing and reconciling that is needed for creating right relationships within which compromised, impure, and sinful people - like us - can live within, in response to, and toward, the realm of God. 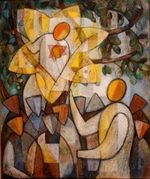 By the end of this Chapter, Jesus will have entered Jerusalem and the last week of his life before he is arrested, tortured and executed.

In this passage he enters Jericho near Jerusalem.

Zacchaeus is a CHIEF tax collector. This probably means he has been given a contract by the hated Roman authorities (for an agreed set price) to collect taxes from a large region. He would employ others to actually do the collecting - one of whom we met in last week's parable, Luke 18:9-14.

Zacchaeus is NOT popular. Not only does he collect taxes for the oppressive Roman occupiers; in everyone's eyes he has wealth that does not properly belong to him. That is, no matter how legitimate and honest he might have been, the fact that he has acquired wealth (as compared with having inherited it from his family) means that someone else has lost wealth. Zacchaeus is despised for this, and not trusted.

Climbing a tree would be a highly unusual, foolish, and immodest thing for a rich person to do. Zacchaeus would now be openly mocked as well as despised and distrusted. But it would be obvious to Jesus that here was someone exceptionally interest in him.

The sycamore tree is the Biblical tree of life. In the Middle East the sycamore is a type of fig tree but is consider inferior to a true fig.

Jesus honours Zacchaeus' foolish behaviour by announcing that he will eat with him. Eating with anyone was a sign of social approval.

Zacchaeus is aware of the honour being bestowed on him by Jesus and is made happy by it.

But the crowd disapproves. Jesus has presented them with a tough choice.

They despise and distrust Zacchaeus; but Jesus is honoured and lauded by them. Since Jesus goes to eat with Zacchaeus, if they want to continue to hold Jesus in high regard, they will have to accept Jesus' opinion of Zacchaeus and also grant honour to Zacchaeus and stop despising him. Or they will have to change their regard for Jesus - and their hopes that he was going to do big things next week during the Passover in Jerusalem.

The response of the crowd, shifting from approval to disapproval of Jesus, foreshadows what lies ahead for Jesus in the week to come: "Hosanna!" during his triumphant entry to Jerusalem, and then "Crucify him!" during his trial.

To counter the crowd's opinion of him, Zacchaeus responds by pointing out the good works he already does. Bruce Malina and Richard Rohrbaugh point out that the verb tenses here for "give" and "pay back" are present tense, and NOT future tense as shown in most English translations: "will give," "will pay back."

Zacchaeus is not promising to change his behaviour, he is pointing out the good he already is doing. That is why there is no mention of any repentance at this point. The Message actually has the most reliable translation of Verses 7-8:

Everyone who saw the incident was indignant and grumped, "What business does he have getting cozy with this crook?"

Zacchaeus just stood there, a little stunned. He stammered apologetically, "Master, I give away half my income to the poor—and if I'm caught cheating, I pay four times the damages."

Jesus acknowledges Zacchaeus' good works and solidifies his honouring of Zacchaeus by declaring that salvation has come to his house, and that Zacchaeus is indeed "one of us," a son of Abraham. Thus Jesus restores Zacchaeus into the social fabric of Jewish life in Jericho.

Notice that Zacchaeus does NOT repent of his occupation; he does not give up being a chief tax collector. Like all of us, Zacchaeus remains compromised, impure, sinning.

Thus, one possible moral of this story is to realize that salvation does not require, nor result in, perfection. Salvation in this lifetime is not about the end state. Salvation is the process, the healing and reconciling that is needed for creating right relationships within which compromised, impure, and sinful people - like us - can live within, in response to, and toward, the realm of God.

Verse 10, "For the Son of Man came to seek out and save the lost," raises the question of just who in this story are "the lost?"

The salvation that comes to Zacchaeus is the restoring of his right relationship within his community.

But in this story, it is the attitude of the crowd that is being challenged by Jesus.

When Jesus declares that salvation has come to Zacchaeus' house, he is in effect also declaring that healing (salvation) has come to the crowd since it is Zacchaeus' relationship to them that is being healed.

And, given the behaviours already exhibited by Zacchaeus - giving to the poor, making amends for fraud, making a fool of himself just for a glimpse of Jesus; and those exhibited by the crowd: shallow enthusiasm, sharing in gossip, judging others by their outward appearances, refusing to give credit for the good works done by those they distrust; then perhaps it is not unreasonable to imagine that WE are the crowd and to ask what is the salvation we need to hear and receive from Jesus today?

Who is our Zacchaeus?

Who is the person we so distrust that we will not credit their good works? Will not grant them the dignity to which they were born of being "one of us?"

Note: Historical background information is primarily from Bruce Malina and Richard Rohrbaugh, Social Science Commentary on the Synoptic Gospels, pages 302-304; and the writings of Amy-Jill Levine, et. al. See below.

1 He entered Jericho and was passing through it. 2 A man was there named Zacchaeus; he was a chief tax collector and was rich. 3 He was trying to see who Jesus was, but on account of the crowd he could not, because he was short in stature. 4 So he ran ahead and climbed a sycamore tree to see him, because he was going to pass that way. 5 When Jesus came to the place, he looked up and said to him, "Zacchaeus, hurry and come down; for I must stay at your house today." 6 So he hurried down and was happy to welcome him. 7 All who saw it began to grumble and said, "He has gone to be the guest of one who is a sinner." 8 Zacchaeus stood there and said to the Lord, "Look, half of my possessions, Lord, I will give to the poor; and if I have defrauded anyone of anything, I will pay back four times as much." 9 Then Jesus said to him, "Today salvation has come to this house, because he too is a son of Abraham. 10 For the Son of Man came to seek out and to save the lost."

1 Then Jesus entered and walked through Jericho. 2 There was a man there, his name Zacchaeus, the head tax man and quite rich. 3 He wanted desperately to see Jesus, but the crowd was in his way—he was a short man and couldn't see over the crowd. 4 So he ran on ahead and climbed up in a sycamore tree so he could see Jesus when he came by.

5 When Jesus got to the tree, he looked up and said, "Zacchaeus, hurry down. Today is my day to be a guest in your home." 6 Zacchaeus scrambled out of the tree, hardly believing his good luck, delighted to take Jesus home with him. 7 Everyone who saw the incident was indignant and grumped, "What business does he have getting cozy with this crook?"

8 Zacchaeus just stood there, a little stunned. He stammered apologetically, "Master, I give away half my income to the poor—and if I'm caught cheating, I pay four times the damages."

9 Jesus said, "Today is salvation day in this home! Here he is: Zacchaeus, son of Abraham! 10 For the Son of Man came to find and restore the lost."