These wisdom sayings are advising us to deal astutely with this world fully as it is, on its own terms, but also knowing full well that it is temporary and failing. We are to reach through this passing world to embrace the coming world of God's kingdom. 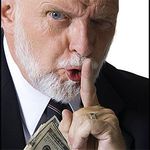 Over the last few Sundays, the "audience" has shifted from "large crowds" (Luke 14:25), to "Pharisees and the scribes" (15:2) to now, "the disciples." (16:1) And, apart from the story of the prodigal and his father and brother (Luke 15:11-32), the content of Jesus' teaching is primarily wisdom stories and concluding sayings. (And often the concluding sayings are only loosely connected to the actual content of the stories. For example, the sheep and the coin are lost but do not sin nor repent. The sayings about joy in heaven would more logically follow the story of the prodigal son.)

And so, what are we to make of the story of the manager (or steward or agent) and the concluding sayings?

First, we should understand that the manager is indeed being shrewd (or wise or prudent or astute), in that, knowing that he is incapable of earning or begging a living, he uses the time and resources at hand to ensure a third option - social obligation. By reducing their indebtedness, the manager is making the debtors socially indebted to him, and therefore will be able to drop by for free meals.

Bruce Malina and Richard Rohrbaugh (Pages 292-294, see footnote below) debunk the suggestion that the manager is simply returning an unjust excessive charge. This interpretation does not make any sense in the historical context, nor in the literary context of the story itself.

Malina and Rohrbaugh also suggest that in the context of the story, the manager has been treated generously by the master at the outset since he was only fired instead of being more severely punished.

And. Since the manager represents the master (even after being fired since the others were not aware of this change), in the eyes of others the master is now in a pickle.

What are the disciples of Jesus, then and now, to make of this story? The variety amongst English translations of verses 8 to 13 suggest that the point of the story is not straight forward.

I take it that this text is a wisdom teaching and not a kingdom teaching.

By that I mean that the kingdom teachings of Jesus are intended to help us understand the nature and character and purposes of the Kingdom of God which is already at hand but not yet fully realized. But as disciples of Jesus, we are simultaneously occupying two spaces at the same time: We live in this world which is passing away, AND we also live in the Kingdom of God which is coming into being. Given this dual reality, how then shall we live? Wisdom teachings such as this text address this crucial question.

In simple terms, Jesus is saying, "Don't be stupid. "Mammon," the wealth of this temporary world, WILL fail you, but in the meantime use it for eternal, unfailing purposes - build relationships that will endure."

Verses 10, 11, and 12 give some pretty straight forward advice about developing and testing one's character. And Verse 13 returns to, and sharpens, the point of Verse 9:

There are two worlds. This life, which is temporary and passing away; and the Kingdom of God, which is eternal and is coming into being. You must be committed to one or the other. You cannot serve both. Instead you will use one to serve the other.

Jesus' questions to us in Verses 11 and 12 are particularly sharp for all Christians and congregations:

It seems to me that too often churches believe they can make a shambles of managing their earthly property and yet somehow still be good stewards of heavenly riches.

These wisdom sayings are NOT advising us to be cynical or duplicitous in our dealings with this world.

They ARE advising us to deal astutely with this world fully as it is, on its own terms, but also knowing full well that it is temporary and failing. We are to reach through this passing world to embrace the coming world of God's kingdom.

Note: Historical background information is primarily from Bruce Malina and Richard Rohrbaugh, Social Science Commentary on the Synoptic Gospels, pages 291-294; and the writings of Amy-Jill Levine, et. al. See below.

1 Then Jesus said to the disciples, "There was a rich man who had a manager, and charges were brought to him that this man was squandering his property. 2 So he summoned him and said to him, 'What is this that I hear about you? Give me an accounting of your management, because you cannot be my manager any longer.' 3 Then the manager said to himself, 'What will I do, now that my master is taking the position away from me? I am not strong enough to dig, and I am ashamed to beg. 4 I have decided what to do so that, when I am dismissed as manager, people may welcome me into their homes.' 5 So, summoning his master's debtors one by one, he asked the first, 'How much do you owe my master?' 6 He answered, 'A hundred jugs of olive oil.' He said to him, 'Take your bill, sit down quickly, and make it fifty.' 7 Then he asked another, 'And how much do you owe?' He replied, 'A hundred containers of wheat.' He said to him, 'Take your bill and make it eighty.' 8 And his master commended the dishonest manager because he had acted shrewdly; for the children of this age are more shrewd in dealing with their own generation than are the children of light. 9 And I tell you, make friends for yourselves by means of dishonest wealth so that when it is gone, they may welcome you into the eternal homes.

10 "Whoever is faithful in a very little is faithful also in much; and whoever is dishonest in a very little is dishonest also in much. 11 If then you have not been faithful with the dishonest wealth, who will entrust to you the true riches? 12 And if you have not been faithful with what belongs to another, who will give you what is your own? 13 No slave can serve two masters; for a slave will either hate the one and love the other, or be devoted to the one and despise the other. You cannot serve God and wealth."

1 Jesus said to his disciples, "There was once a rich man who had a manager. He got reports that the manager had been taking advantage of his position by running up huge personal expenses. 2 So he called him in and said, 'What's this I hear about you? You're fired. And I want a complete audit of your books.'

3 "The manager said to himself, 'What am I going to do? I've lost my job as manager. I'm not strong enough for a laboring job, and I'm too proud to beg... . 4 Ah, I've got a plan. Here's what I'll do... then when I'm turned out into the street, people will take me into their houses.'

5 "Then he went at it. One after another, he called in the people who were in debt to his master. He said to the first, 'How much do you owe my master?'

6 "He replied, 'A hundred jugs of olive oil.' "The manager said, 'Here, take your bill, sit down here—quick now—write fifty.'

8 "Now here's a surprise: The master praised the crooked manager! And why? Because he knew how to look after himself. Streetwise people are smarter in this regard than law-abiding citizens. They are on constant alert, looking for angles, surviving by their wits. 9 I want you to be smart in the same way—but for what is right—using every adversity to stimulate you to creative survival, to concentrate your attention on the bare essentials, so you'll live, really live, and not complacently just get by on good behavior."

10 Jesus went on to make these comments:

12 If you're not honest in small jobs,
who will put you in charge of the store?