The name "Legion" has a double meaning. Literally, it means, "Many, thousands, multitudes." But it also alludes to the occupying Roman soldier legions which numbered 3,000 to 6,000 each. Many Israelites felt the Roman legions were another form of demonic occupation. 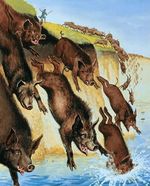 The demons entered the swine

Agnus Day appears with the permission of www.agnusday.org

The description of the behaviour in verses 27 and 29 is exactly how a possessed person behaves: shouting, naked, living among graves; and how the community responds: isolating, guarding, chaining.

Notice the honorific greeting used to greet Jesus: "Son of the Most High God."

When Jesus, asks him his name in verse 30, this is a sign of Jesus' higher status: well-behaved subjects speak first only to acknowledge the sovereign, "Your Majesty," and then wait for well-behaved sovereigns to ask for their name. Giving one's name to a superior gives them power to control and direct you.

The name "Legion" has a double meaning. Literally, it means, "Many, thousands, multitudes." But it also alludes to the occupying Roman soldier legions which numbered 3,000 to 6,000 each. Many Israelites felt the Roman legions were another form of demonic occupation.

The presence of a herd of swine nearby indicates that this scene is taking place in land used by non-Israelites.

The man seeks to follow Jesus out of devotion, and out of the debt now owed to Jesus for freeing him. But Jesus directs him to give his devotion to the one who truly freed him - God. Notice that the man fails to do this and instead continues to praise Jesus.

Note: Historical background information is primarily from Bruce Malina and Richard Rohrbaugh, Social Science Commentary on the Synoptic Gospels, pages 259-260; and the writings of Amy-Jill Levine, et. al. See below.

26 Then they arrived at the country of the Gerasenes, which is opposite Galilee. 27 As he stepped out on land, a man of the city who had demons met him. For a long time he had worn no clothes, and he did not live in a house but in the tombs. 28 When he saw Jesus, he fell down before him and shouted at the top of his voice, "What have you to do with me, Jesus, Son of the Most High God? I beg you, do not torment me"—29 for Jesus had commanded the unclean spirit to come out of the man. (For many times it had seized him; he was kept under guard and bound with chains and shackles, but he would break the bonds and be driven by the demon into the wilds.) 30 Jesus then asked him, "What is your name?" He said, "Legion"; for many demons had entered him. 31 They begged him not to order them to go back into the abyss.

32 Now there on the hillside a large herd of swine was feeding; and the demons begged Jesus to let them enter these. So he gave them permission. 33 Then the demons came out of the man and entered the swine, and the herd rushed down the steep bank into the lake and was drowned.

34 When the swineherds saw what had happened, they ran off and told it in the city and in the country. 35 Then people came out to see what had happened, and when they came to Jesus, they found the man from whom the demons had gone sitting at the feet of Jesus, clothed and in his right mind. And they were afraid. 36 Those who had seen it told them how the one who had been possessed by demons had been healed. 37 Then all the people of the surrounding country of the Gerasenes asked Jesus to leave them; for they were seized with great fear. So he got into the boat and returned. 38 The man from whom the demons had gone begged that he might be with him; but Jesus sent him away, saying, 39 "Return to your home, and declare how much God has done for you." So he went away, proclaiming throughout the city how much Jesus had done for him.

26 They sailed on to the country of the Gerasenes, directly opposite Galilee. 27 As he stepped out onto land, a madman from town met him; he was a victim of demons. He hadn't worn clothes for a long time, nor lived at home; he lived in the cemetery. 28 When he saw Jesus he screamed, fell before him, and bellowed, "What business do you have messing with me? You're Jesus, Son of the High God, but don't give me a hard time!" 29 (The man said this because Jesus had started to order the unclean spirit out of him.) Time after time the demon threw the man into convulsions. He had been placed under constant guard and tied with chains and shackles, but crazed and driven wild by the demon, he would shatter the bonds.

"Mob. My name is Mob," he said, because many demons afflicted him. 31 And they begged Jesus desperately not to order them to the bottomless pit.

32 A large herd of pigs was browsing and rooting on a nearby hill. The demons begged Jesus to order them into the pigs. He gave the order. 33 It was even worse for the pigs than for the man. Crazed, they stampeded over a cliff into the lake and drowned.

34 Those tending the pigs, scared to death, bolted and told their story in town and country. 35 People went out to see what had happened. They came to Jesus and found the man from whom the demons had been sent, sitting there at Jesus' feet, wearing decent clothes and making sense. It was a holy moment, and for a short time they were more reverent than curious. 36 Then those who had seen it happen told how the demoniac had been saved.

37 Later, a great many people from the Gerasene countryside got together and asked Jesus to leave—too much change, too fast, and they were scared. So Jesus got back in the boat and set off. 38 The man whom he had delivered from the demons asked to go with him, but he sent him back, saying, 39 "Go home and tell everything God did in you." So he went back and preached all over town everything Jesus had done in him.