I'm left wondering how often I prefer being dead to being obedient. I wonder how many times, Jesus' command to, "Rise," has fallen on deaf ears? 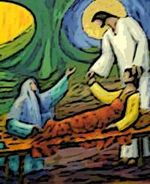 Young man, I say to you, rise!

In Luke's narrative, this story is the culmination that leads to the gossip about Jesus reaching the point that John the Baptist sends some of his disciples to ask Jesus:

Jesus will respond to their query in his typical fashion - NOT by claiming the truth of his reputation - that would be dishonourable bragging. Rather, he responds by pointing to his words and actions, and leaving it up to the other to make their own assessment:

Go and tell John what you have seen and heard: the blind receive their sight, the lame walk, the lepers are cleansed, the deaf hear, the dead are raised, the poor have good news brought to them.
Luke 7:22
(Recall how this list matches the passage from Isaiah 61:1-2 with which Jesus began his ministry, Luke 4:16-21)

This lectionary passage is evidence of the last two items on this list: the dead are raised, and the poor have good news brought to them.

Verse 11. Jesus' reputation has grown to the point that "a large crowd" as well as his disciples now travel with him.

Verse 12. As they approach a town, a funeral procession is coming out - the details of the situation are quickly passed from the crowd of mourners to the crowd of Jesus' followers.

As Malina and Rohrbaugh point out:

This is a woman in trouble. Since no family connection remained, such a woman's life expectancy was extremely short. ... a son was a mother's lifelong protector and her ultimate social security.
Page 253, see footnote below.

Verse 13. The death of one's children was a common experience in Jesus' time. Malina and Rohrbaugh estimate that 50% of children died by age 5, and the average life expectancy was 30 to 35. So the meeting of a funeral procession for a son is not unexpected. It is the detail that, having already lost her husband to death, this woman now has also lost her only son which makes this encounter so poignant. (And remember that Jesus himself is a widow's son.)

Verse 14. Note that Jesus does NOT touch the dead man - which would make him unclean. However, note that he speaks to the young man in the present tense:

Young man, I say to YOU, rise.

Since death is the ultimate, seemingly-irreversible social dislocation, addressing the young man in this way reverses the irreversible, and establishes a relationship with him.

And Jesus' command to "Rise," creates the impossible-possibility for the young man to accept this new relationship - by obeying.

Verse 15. Wow. The young man prefers obeying Jesus to staying dead! He sits up and talks.

But as Malina and Rohrbaugh go on to comment:

The critical point occurs when ... Jesus gave the young man back "to his mother." That is the moment of HER being raised from social death.
Page 253, see footnote below.

Notice that since the young man sat up under the command of Jesus, he is honour bond to Jesus. Jesus releases him from his debt bond to Jesus by giving him to his mother - with no expectation of any reciprocal exchange of favours or goods.

It is kind of cool that a dead man becomes alive again. But in a culture that is impoverished by onerous debts, taxes, and favours that are exacted by superiors, the real miracle in this story is:

the poor have good news brought to them.

Good news is BROUGHT to the poor. They don't have to go to it. It comes to them. Free. No strings attached.

Verse 16. Notice that the crowd rightly praise God, not Jesus. They give Jesus the honour status of "prophet," which is considerably higher than his birth status as country-boy nobody, carpenter from that back woods hamlet of Nazareth, whose mother has a ridiculous story about how she got pregnant, poor Joseph, her husband, what a loser.

But it is still not quite the status Luke let us in on back in Luke 3:22:

You are my Son, the Beloved. With you I am well pleased.

That status recognition will require a whole new way of not being dead. Which we'll get to later.

Meanwhile, I'm left wondering how often I prefer being dead to being obedient.

I wonder how many times, Jesus' command to, "Rise," has fallen on deaf ears?

11 Soon afterwards he went to a town called Nain, and his disciples and a large crowd went with him. 12 As he approached the gate of the town, a man who had died was being carried out. He was his mother's only son, and she was a widow; and with her was a large crowd from the town. 13 When the Lord saw her, he had compassion for her and said to her, "Do not weep." 14 Then he came forward and touched the bier, and the bearers stood still. And he said, "Young man, I say to you, rise!" 15 The dead man sat up and began to speak, and Jesus gave him to his mother. 16 Fear seized all of them; and they glorified God, saying, "A great prophet has risen among us!" and "God has looked favorably on his people!" 17 This word about him spread throughout Judea and all the surrounding country.

11 Not long after that, Jesus went to the village Nain. His disciples were with him, along with quite a large crowd. 12 As they approached the village gate, they met a funeral procession—a woman's only son was being carried out for burial. And the mother was a widow. 13 When Jesus saw her, his heart broke. He said to her, "Don't cry." 14 Then he went over and touched the coffin. The pallbearers stopped. He said, "Young man, I tell you: Get up." 15 The dead son sat up and began talking. Jesus presented him to his mother.

16 They all realized they were in a place of holy mystery, that God was at work among them. They were quietly worshipful—and then noisily grateful, calling out among themselves, "God is back, looking to the needs of his people!" 17 The news of Jesus spread all through the country.