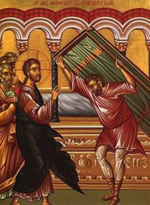 He took up his mat and began to walk

Again, we have a small section from a much longer, more complex passage, John 5:1-20, and on their own these 9 verses do not tell us that the healing took place on a Sabbath, nor that Jesus' command, "Take up your mat," violates the Sabbath law to carry no burdens, nor that:

For this reason the (Judeans) were seeking all the more to kill (Jesus), because he was not only breaking the Sabbath, but was also calling God his own Father, thereby making himself equal to God.
John 5:18

Nor do they tell what Jesus says in response:

(By my word of honour), I tell you, the Son can do nothing on his own, but only what he sees the Father doing; for whatever the Father does, the Son does likewise.
John 5:19

This is shocking claim - and dangerous to established religious order. If Jesus can get away with saying God is not following one of the most sacred and central commandments in Scripture, who could say what else might not be eternally true and sacred? Where might it all end?

Malina and Rohrbaugh provide helpful background on the difference between Disease and Illness (Pages 113-115, see footnote below.) Physical symptoms - the disease - were of little concern. The main concern was with the social dislocation - the illness - associated with the physical symptoms. Physical symptoms were primarily seen as a sign of some disruption / disordering / dislocation of proper relationships - that is, of sin, since that is precisely what "sin" is - a breach of social relationships: with God, with family; with neighbours; etc. (Note that while Jesus accepts that connection in this story, in a somewhat parallel healing in John 9:1-41, Jesus denies the absolute connection between sin and illness.)

Thus, as we read this story today, we too should focus on the healing of broken relationships, and not on the physical symptoms.

Verse 1. Parallel to Jesus' first sign in Cana (changing water into wine) so too, after his second sign, also in Cana (healing a Royal officials son), Jesus goes to Jerusalem where he will be in conflict with the Judean elite authorities. The first time was for the Passover festival. John does not specify which festival this time.

Verse 2. These waters and their healing properties are attested to in Roman records.

Verse 3 and 5. To be an invalid was to be a social outcast, a beggar, and probably homeless. The man had been ill for 38 years - which in itself is longer than the average life span at the time of Jesus.

Verse 4. This verse is placed as a footnote since it is regarded as a later addition explaining the healing properties to generations long since removed from this time and place.

Verse 7. The sick man honourably does not answer Jesus' question directly - to do so would be to ask a favour that he, as an invalid, could not honourably ask of a stranger. Instead, the sick man - assuming that the means of healing is the pool of water - explains his situation. He is truly isolated since he has "no one," that is, no close family who can assist him to get into the pool ahead of all the others.

Telling the man to do these things creates the impossible possibility of a right relationship with Jesus - obedience.

But if we focus on the social relationships as Jesus and everyone there would be doing, our jaws would have dropped way back in Verse 6 when John said, "Jesus SAW him, and KNEW, and SAID to him."

It is actually these 3 actions of Jesus that are the "miracle" of this story, because in so doing Jesus has broken every social norm of his time by creating the beginnings of a relationship with a nobody.

Verse 9. Well of course the man was immediately made well. Taking up his mat and walking was the easy part after the difficult work or restoring his right relationship with his community was done by Jesus stopping and seeing, knowing, and speaking with him.

Anyone here tried stopping, seeing, knowing, and speaking with a beggar recently?

It is too bad the Lectionary doesn't include Verses 10-20, because that would help us realize what dangerous work it is.

Note: Historical background information is primarily from Bruce Malina and Richard Rohrbaugh, Social Science Commentary on the Gospel of John, pages 108-115; and the writings of Amy-Jill Levine, et. al. See link below.

1 After this there was a festival of the Jews, and Jesus went up to Jerusalem.

2 Now in Jerusalem by the Sheep Gate there is a pool, called in Hebrew Beth-zatha, which has five porticoes. 3 In these lay many invalids—blind, lame, and paralyzed. 5 One man was there who had been ill for thirty-eight years. 6 When Jesus saw him lying there and knew that he had been there a long time, he said to him, "Do you want to be made well?" 7 The sick man answered him, "Sir, I have no one to put me into the pool when the water is stirred up; and while I am making my way, someone else steps down ahead of me." 8 Jesus said to him, "Stand up, take your mat and walk." 9 At once the man was made well, and he took up his mat and began to walk. Now that day was a sabbath.

1 Soon another Feast came around and Jesus was back in Jerusalem. 2 Near the Sheep Gate in Jerusalem there was a pool, in Hebrew called Bethesda, with five alcoves. 3 Hundreds of sick people—blind, crippled, paralyzed—were in these alcoves. 5 One man had been an invalid there for thirty-eight years. 6 When Jesus saw him stretched out by the pool and knew how long he had been there, he said, "Do you want to get well?"

7 The sick man said, "Sir, when the water is stirred, I don't have anybody to put me in the pool. By the time I get there, somebody else is already in."

8 Jesus said, "Get up, take your bedroll, start walking." 9 The man was healed on the spot. He picked up his bedroll and walked off. That day happened to be the Sabbath.