If Jesus were to turn stones into bread, instead of confirming his status as God's Son, it would confirm the validity of the testing. It would confirm the correctness of asking, "IF you are...?" The appropriateness of raising the niggling possibility of, "Maybe you're not?" 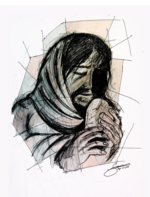 Sermon by the Rev. Dr. George Hermanson, "Times of Testing."

As you may know from reading other posts, I am no fan of the way the Lectionary chops up the integrity of each Gospel as though what comes before and after each section has no bearing on what is read today.

But in this case, I'll concede that the story of the testing of Jesus in the desert at the outset of his ministry is a good first "book-end" for the second testing that will close his ministry - his brutal execution.

As is the case here, Jesus will then be tested 3 times about his identity:

Well, as a matter of fact, back here in today's lesson from Chapter 4, it is only moments ago, that Luke has provided us with the response to these three challenges to Jesus' identity:

"and when Jesus also had been baptized and was praying, the heaven opened and the Holy Spirit descended upon him in bodily form like a dove. And a voice came from heaven, 'You are my Son, the Beloved; with you I am well pleased."
Luke 3:21-22

However, as Malina and Rohrbaugh (see footnote below) helpfully point out, such an outlandish change in status from a bottom-of-the-heap carpenter's son to a top-of-the-heap God's son, would never be accepted without challenge, without testing. And so Luke immediately provides 3 forms of evidence for his claim:

The first thing to note about this story is that it is to be understood as a TESTING rather than a temptation. The issue here is Jesus' loyalty to God, not his moral perfection. The high honour status of Jesus has been declared by the voice from Heaven - it is not something of Jesus' own doing.

Remember the long way that YHWH your God has led you these forty years in the wilderness, in order to humble you, testing you to know what was in your heart ...

What is offered here, then, is a test of Jesus' true heart. Here, specifically, Jesus is tested in regards to his loyalty to God, who has chosen him for the role of holy man.

Malina and Rohrbaugh also say (page 240), "The original 'Satan' was a Persian secret-service agent who tested loyalty to the King." Much like oppressive governments do today - using under-cover agents posing as friends and neighbours who ask in casual, "private," conversations, "So. What do you think about the price of bread?"

Luke has ascribed a high, cosmic, honour to Jesus and so, as Malina and Rohrbaugh say (page 240):

It is important to recognize that this test comes at the cosmic level where false hearts are inexorably exposed and no secrets can be hidden. ... this is first and foremost a test of (Jesus') kinship loyalty (to God). Note carefully how the devil frames the first challenge. "IF you are the Son of God ..." Precisely that has been the claim and precisely that is what is being tested.

Malina and Rohrbaugh rightly emphasize that sneaky, snake-in-the-grass, creator-of-hesitation, and under-miner-of-relationships, two-letter word - "If." This word is the test.

We have just been told that Jesus IS the Son of God - no "ifs," "ands," or "buts." But if Jesus were to turn stones into bread, instead of confirming his status as God's Son, it would confirm the validity of the testing. It would confirm the correctness of asking, "IF you are ...?" The appropriateness of raising the niggling possibility of, "Maybe you're not?"

He does not answer in his own words, as if his honor derives from what he is in himself. To do that would be to grasp honor above that of his own Father and turn honor into dishonor. So he answers as a loyal Middle Eastern son would always answer - with something from his family tradition. He offers the words in Deuteronomy of his true Father and by such laudable behavior he gains honor and virtue. Jesus wins the first round hands down.
(Malina and Rohrbaugh, page 240f.)

The second test begins with the devil making a false claim - that the kingdoms of the world, their glory and authority, have been given to him to dispose of howsoever he chooses. In other words, the devil is claiming dominion over resources that properly are God's alone. And so the test is: Whom will you serve? God or the devil? To whom will you show obedience and subservience? Whom will you worship?

Once again Jesus passes the test - not by his own words or deeds, which would be dishonourable - but by drawing from the words (Deuteronomy 6:13) of the One who has true dominion over the kingdoms of the world - God.

Jesus has survived the first two tests by drawing from the wisdom of the Scriptures, and so now the ever inventive devil sets a trap by using Scripture itself! What will Jesus do now? Surely it is not possible to use one text to counter another since all of Scripture is God's word?

This is the most subtle and devious of the tests since it requires Jesus not to be stupid; not to be simply literally minded about the text, but to be wise about the understanding and appropriate application of Scripture texts.

Anyone have any guesses about whether Jesus will be stupid or wise?

Jesus does indeed once again demonstrate that he is an honorable, loyal, and worthy, true Son of God as he again uses the words of his Father (Deuteronomy 6:16) to reject the devil's test.

Having been thoroughly defeated 3 times, the devil slinks off "until an opportune time." But when he returns in Chapter 22, it will be to test the disciples at the time of Judas' betrayal and Peter's denial of Jesus.

By reporting this cosmic testing of Jesus, Luke allows us to be the ones to give earthly testimony and acclaim of Jesus' true worth as a true Son of God. Jesus' heart and loyalty have been tested. Next up will be you and I.

1 Jesus, full of the Holy Spirit, returned from the Jordan and was led by the Spirit in the wilderness, 2 where for forty days he was tempted by the devil. He ate nothing at all during those days, and when they were over, he was famished. 3 The devil said to him, "If you are the Son of God, command this stone to become a loaf of bread." 4 Jesus answered him, "It is written, 'One does not live by bread alone.'"

5 Then the devil led him up and showed him in an instant all the kingdoms of the world. 6 And the devil said to him, "To you I will give their glory and all this authority; for it has been given over to me, and I give it to anyone I please. 7 If you, then, will worship me, it will all be yours." 8 Jesus answered him, "It is written,
'Worship the Lord your God,
and serve only him.'"

9 Then the devil took him to Jerusalem, and placed him on the pinnacle of the temple, saying to him, "If you are the Son of God, throw yourself down from here, 10 for it is written,
'He will command his angels concerning you,
to protect you,'
11 and
'On their hands they will bear you up,
so that you will not dash your foot
against a stone.'"
12 Jesus answered him, "It is said, 'Do not put the Lord your God to the test.'" 13 When the devil had finished every test, he departed from him until an opportune time.

1 Now Jesus, full of the Holy Spirit, left the Jordan and was led by the Spirit into the wild. 2 For forty wilderness days and nights he was tested by the Devil. He ate nothing during those days, and when the time was up he was hungry.

3 The Devil, playing on his hunger, gave the first test: "Since you're God's Son, command this stone to turn into a loaf of bread."

4 Jesus answered by quoting Deuteronomy: "It takes more than bread to really live."

5 For the second test he led him up and spread out all the kingdoms of the earth on display at once. 6  Then the Devil said, "They're yours in all their splendor to serve your pleasure. I'm in charge of them all and can turn them over to whomever I wish. 7 Worship me and they're yours, the whole works."

9 For the third test the Devil took him to Jerusalem and put him on top of the Temple. He said, "If you are God's Son, jump. 10 It's written, isn't it, that 'he has placed you in the care of angels to protect you; 11 They will catch you; you won't so much as stub your toe on a stone'?"

13 That completed the testing. The Devil retreated temporarily, lying in wait for another opportunity.

There is an important difference between having "power" and having "dominion." In Scripture, Satan / the Devil / the Evil One may exercise power, but they are always subject to the dominion of God.
In this story, Satan over-states, i.e., lies, about his authority. He has not been given, and does not have, dominion.

Are you sure that it is stating that God has dominion over the kingdoms over the world? I'd read 1 John 5:19 first.