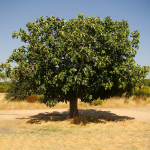 A man had a fig tree

This text comes at the end of a long section of teachings and parables that began way back in Luke 12:1, "Meanwhile, when the crowd gathered by the thousands, so that they began to trample on one another, he began to speak ..."

Unfortunately for us poor preachers, the authors of the Lectionary have once again given us a passage with two distinct and unrelated messages. (Don't be misled by the "Then" that begins Luke 13:6 - it is a simple marker of time, not of logical connection. The parable in Luke 13:6-9 is not meant to clarify or be a further teaching about Luke 13:1-5.) So we are faced with the daunting task of preparing two mini-sermons or of mostly ignoring the one-half of the reading that one-half of the congregation were wanting us to say more about! Good luck with that dilemma everyone.

I'm not sure why Luke places these two stories together, but a possible sermon link that I can see is that catastrophes such as those described in the first part of the lesson can often lead to the barrenness that is described in the second part. Experiencing something evil can lead to losing one's faith, one's heart, one's will to live.

When bad things happen to good people our way of making sense of the world can be shattered - emotionally, spiritually, physically - and also morally and mentally.

Verse 1 and 4. These incidents are not reported outside of Luke according to my annotated Bible's footnotes. However, Pilate's slaughtering of others is recorded elsewhere - and ought to give us a foreshadowing of the blood that will be mingled with his sacrifice of a certain other Galilean, Jesus. And the collapse of a tower would not be unheard of.

These two incidents capture 2 of the 3 main causes of human pain and suffering: the deliberate actions of other people, and undeserved accidents. (The third cause is sickness and disease.)

Luke doesn't tell us why some of those present told Jesus about what Pilate had done to the Galileans. Perhaps it had just happened and this was the first time the news had reached those in the crowd? Perhaps - knowing that Jesus and his closest followers were Galileans - there was concern about family and friends? Perhaps there was wondering about how Jesus, as a Galilean, would respond to Pilate's actions?

What we do know is that in both cases Jesus responds to the unasked question, "Why me?" Why has this undeserved pain and death happened?

In both cases, Jesus would shock his audience by saying, "It did not happen to them because they deserved it. They did not die because they were worse sinners than those who lived."

This teaching of Jesus would shock his audience because the wide-spread, taken for granted, deeply held, bed-rock belief was that EVERYTHING happened for a reason. God is just, and if bad things happen to someone, it has to be because - in some way - they deserve it. Or - in some way - something good will come from it and it only seems like a bad thing to us.

But Jesus rejects this line of belief. Those who died were not more deserving of dying than those who lived - they were not worse sinners. And. What happened is a bad thing because it will happen to you also if you don't repent.

Jesus is silent on the question of why God - who is worthy of our trust and worship - allows undeserved bad things to happen to good people in this life. But boldly stepping into this void, I offer my own thoughts on God And Evil: The Power Of Love.

And let's remember that in the Bible, "repent' means to have a change of heart, a change of mind, a change of habits and impulses to see and do things in a new way - to see things the way God sees them, and to then change one's behaviour so that one's habits, impulses, thoughts, and actions bring one into the way of relating to others that God would have us be.

And so, when Jesus says, "unless you repent, you will all perish," he is really stating the obvious. When we are not relating to others as God would have us do, we are already perishing. We are already falling short of the fullness of life that God desires for us. And unless we stop doing that, unless we change, unless we repent - we will just keep perishing.

Verses 6 to 9. The last verses are actually more of a conclusion to this long section of teachings than a response to the immediately previous verses alone.

In effect, Jesus is saying:

I've just dumped a lot of manure on you, and I'm giving you a year before I come back to see if you are bearing good fruit or not.

So pay attention to what I've just taught you. Absorb it. Take it in.

And let me activate in you what you are already designed for.

You don't have to become completely different - become a whole new tree. Just bear the fruit that you already have been created for; already have the capacity for.

(And though he doesn't explicitly say it here ...) And together, be a rich and varied field of life with many different kinds of fruits.

And perhaps for this lesson, the nutrient that might end someone's barrenness is a pastorally helpful reflection on why undeserved bad things happen that will lead to repentance of old ways of thinking, feeling, and responding to evil.

And perhaps it's just me ... but be prepared for some joker to say on the way out after church, "Pastor. Your sermon was a real load of manure today." And pray that they really mean it as Jesus has meant it.

6 Then he told this parable: "A man had a fig tree planted in his vineyard; and he came looking for fruit on it and found none. 7 So he said to the gardener, 'See here! For three years I have come looking for fruit on this fig tree, and still I find none. Cut it down! Why should it be wasting the soil?' 8 He replied, 'Sir, let it alone for one more year, until I dig around it and put manure on it. 9 If it bears fruit next year, well and good; but if not, you can cut it down.'"

6 Then he told them a story: "A man had an apple tree planted in his front yard. He came to it expecting to find apples, but there weren't any. 7 He said to his gardener, 'What's going on here? For three years now I've come to this tree expecting apples and not one apple have I found. Chop it down! Why waste good ground with it any longer?'

8 "The gardener said, 'Let's give it another year. I'll dig around it and fertilize, 9 and maybe it will produce next year; if it doesn't, then chop it down.'"

Very thoughtful. Thanks for sharing your insights.