In this passage, John has Mary portray the shocking intimacy of loyalty, trust, and bonding with Jesus that over-rides cultural norms; and contrasts that with the disloyalty and dishonesty of Judas. 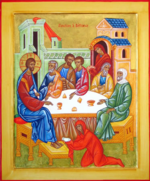 In the Gospel of John, this lesson is the last event before Jesus enters Jerusalem for the last time on the day we now call Palm Sunday.

Bethany is a small community within walking distance of Jerusalem. It is the home town of Lazarus, whom Jesus has raised from the dead, John 11:17-44. This was the final straw for the Judean authorities, for as John reports them saying:

What are we to do? ... If we let him go on like this, everyone will believe in him, and the Romans will come and destroy both our holy place and our nation.
John 11:47-48

And as John then comments:

Jesus then "no longer walked about openly among the (Judeans), but went from (Bethany) to a town called Ephraim in the region near the wilderness." (John 11:54) But as the Passover Festival once again draws near, so Jesus - for the third time - also draws near Jerusalem. This time for the final sign; the final revelation of God's glory.

John then bookends the text we are reading today:

We need to know this context in order to make sense of Mary's anointing of Jesus' feet.

It was a normal custom of hospitality in elite homes for the host to have his slaves wash the feet of guests. But Mary's actions take this common action to whole new level.

First, she performs the action herself.

Second, normally a woman would never touch a man except her husband and children - and then only in private.

Third, a woman would never allow anyone other than her immediate family to see her hair.

Fourth, the cleaning of the feet was not done with perfume - especially with the amount mentioned here which would cost a year's wages for a peasant labourer.

Fifth, this was not the anointing of the head as was done for installation of a new priest, prophet or king; nor of the whole body as was done for the dead. What does this signify? Malina and Rohrbaugh comment (Page 205, see footnote below):

Jesus is about to do something of singular significance. As a rather wealthy mistress of the house, Mary of Bethany takes it upon herself to acknowledge and affirm Jesus' forthcoming significant action.

As a household that has connections with the elites in Jerusalem, Mary would be very aware of the plans underway to have Jesus arrested and executed. And she would know that the form of execution would be crucifixion by the Romans, since that is the method used when the intention is to not just kill a person but to kill what they stand for; to kill belief in them; to kill any possible continuing movement by followers.

And that form of death does not allow for a proper burial with proper anointing of the body. Often the bodies of the crucified were left on the cross for scavenging birds and animals to eat the flesh, with the remains later thrown into a pit.

As Jesus says, "leave her alone. She bought (the perfume) for the day of my burial." (John 12:7) And as Jesus does not say, "And we all know, there will be no proper burial. So now is the time for the anointing."

Verse 8. The poor we do indeed still have with us. And no, we do not always have Jesus.

Yes, a day of unimaginable new life lies ahead. But no, we do not always have Jesus with us.

Yes, Jesus will speak of - and enact - many new and symbolic ways in which he will always be with us. ("I am the vine, you are the branches." ... "This is my body.") But at that moment, for his closet friends, no they will not always have Jesus with them.

Loving Jesus is not easy.

In this passage, John has Mary portray the shocking intimacy of loyalty, trust, and bonding with Jesus that over-rides cultural norms; and contrasts that with the disloyalty and dishonesty of Judas.

Like Mary, can we see what plainly lies ahead? And like her, can we take what we have set aside for our planned future, and instead commit it today for the passion of loving Jesus?

Note: Historical background information is primarily from Bruce Malina and Richard Rohrbaugh, Social Science Commentary on the Gospel of John, pages 204-208; and the writings of Amy-Jill Levine, et. al. See link below.

1 Six days before the Passover Jesus came to Bethany, the home of Lazarus, whom he had raised from the dead. 2 There they gave a dinner for him. Martha served, and Lazarus was one of those at the table with him. 3 Mary took a pound of costly perfume made of pure nard, anointed Jesus' feet, and wiped them with her hair. The house was filled with the fragrance of the perfume. 4 But Judas Iscariot, one of his disciples (the one who was about to betray him), said, 5 "Why was this perfume not sold for three hundred denarii and the money given to the poor?" 6 (He said this not because he cared about the poor, but because he was a thief; he kept the common purse and used to steal what was put into it.) 7 Jesus said, "Leave her alone. She bought it so that she might keep it for the day of my burial. 8 You always have the poor with you, but you do not always have me."

1 Six days before Passover, Jesus entered Bethany where Lazarus, so recently raised from the dead, was living. 2 Lazarus and his sisters invited Jesus to dinner at their home. Martha served. Lazarus was one of those sitting at the table with them. 3 Mary came in with a jar of very expensive aromatic oils, anointed and massaged Jesus' feet, and then wiped them with her hair. The fragrance of the oils filled the house.

4 Judas Iscariot, one of his disciples, even then getting ready to betray him, said, 5 "Why wasn't this oil sold and the money given to the poor? It would have easily brought three hundred silver pieces." 6 He said this not because he cared two cents about the poor but because he was a thief. He was in charge of their common funds, but also embezzled them.

7 Jesus said, "Let her alone. She's anticipating and honoring the day of my burial. 8 You always have the poor with you. You don't always have me."

Whenever I know the source / artist, I do include that information. But I mostly use images that I find by Googling which have no traceable (by me) origin. If you know of a missing credit, please let me know.

Please provide the source of art you use in your posts.