Jesus' baptism is not about repentance. It is about his identity being publicly, ritually re-rooted into God. And this re-rooting of OUR identities continues to be the primary work of the church today. 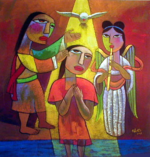 As we learned back in Verse 3:1, Luke pinpoints the date of this event as "the fifteenth year of the reign of the Emperor Tiberius." Which would be 28-29 A.D. Which would make John and Jesus about 33. Which in their day was about the average life span of the poor. Which was about 80% of the population. And which were the people both John and Jesus belonged to. Jesus and John were not young men in the prime of their life. They were elders. And if they had not escaped the usual life of the poor, they also suffered from long hours of hard work, poor diets, and lack of sanitation.

Because of John's prophetic preaching and call for repentance (Luke 3:1-14), his public reputation had grown to the point that people were being filled with expectation and wondering if John might be the Messiah - the Anointed - the Christ - the one to fulfill the centuries old promise of God to King David that a descendant of David would reign over Israel for ever.

Verses 15 to 17. Somewhere back in the mists of my memory, someone said that John is our model. Like John, we too proclaim the good news to the people, we too point to Jesus and his ministry.

Verses 21 to 22. As I mentioned back in my discussion of Luke 3:7-18, I think it is reasonable to understand John's baptism as not being simply for repentance and forgiveness of sins. John's images in Verses 3:7-9 are challenging reliance on our birth parentage and calling for a re-rooting of our identities as offspring of God.

This is specifically what the voice from Heaven announces for Jesus - "You are my Son, the Beloved, with whom I am well pleased." This public declaration in which the father acknowledges paternity was of utmost importance at the time of Jesus. (Malina and Rohrbaugh, page 238)

Jesus' baptism is not about repentance. It is about his identity being publicly, ritually re-rooted into God.

And this re-rooting of OUR identities continues to be the primary work of the church today. May it be so.

Note: Historical background information in this post is drawn primarily from Bruce Malina and Richard Rohrbaugh, Social-Science Commentary on the Synoptic Gospels, pages 235-238; and the writings of Amy-Jill Levine, et. al. See link below.

15 As the people were filled with expectation, and all were questioning in their hearts concerning John, whether he might be the Messiah, 16 John answered all of them by saying, "I baptize you with water; but one who is more powerful than I is coming; I am not worthy to untie the thong of his sandals. He will baptize you with the Holy Spirit and fire. 17 His winnowing fork is in his hand, to clear his threshing floor and to gather the wheat into his granary; but the chaff he will burn with unquenchable fire."

21 Now when all the people were baptized, and when Jesus also had been baptized and was praying, the heaven was opened, 22 and the Holy Spirit descended upon him in bodily form like a dove. And a voice came from heaven, "You are my Son, the Beloved; with you I am well pleased."

15 The interest of the people by now was building. They were all beginning to wonder, "Could this John be the Messiah?"

16 But John intervened: "I'm baptizing you here in the river. The main character in this drama, to whom I'm a mere stagehand, will ignite the kingdom life, a fire, the Holy Spirit within you, changing you from the inside out. 17 He's going to clean house—make a clean sweep of your lives. He'll place everything true in its proper place before God; everything false he'll put out with the trash to be burned."

21 After all the people were baptized, Jesus was baptized. As he was praying, the sky opened up 22 and the Holy Spirit, like a dove descending, came down on him. And along with the Spirit, a voice: "You are my Son, chosen and marked by my love, pride of my life."