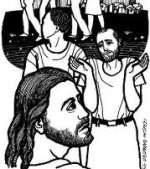 This is the last of 5 weeks devoted to Chapter 6 of the Gospel of John. Beginning with the sign of the feeding of 5,000 men plus an unknown number of women and children, the whole Chapter has used bread as an extended metaphor to describe both: what it is that Jesus is offering; and, what is the relationship Jesus wants us to have with him - and thereby also with the One who abides in him.

This lesson repeats Verses 56-58 from last week. See my notes there about why this teaching is difficult.

The text this week presents us with a crisis of faith, a difficult teaching, that will become a turning point for Jesus' disciples.

So far, following Jesus has been easy and exciting - he has been performing signs and wonders, successfully challenging the authorities, and giving us hopes that "this is indeed the prophet who is to come into the world." (John 6:14)

But when Jesus says:

Those who eat my flesh and drink my blood abide in me, and I in them.
Verse 56

he turns the focus on his disciples - us. It is we who are the "those" in this teaching.

The questions in Verses 61 and 62 are addressed to us:

The second question ought to get us thinking about what we have already SEEN in Jesus - or at least to remember what it is that John has SEEN:

John has SEEN - and wants us to SEE - the Word made flesh, full of grace and truth - and also light and life. But John does NOT want us to "see" in the simple sense of mere understanding, "Oh, now I get it."

If we were to SEE the Son of Man ascending to where he was before, then perhaps we might SEE who it is who has descended from Heaven and is right here before our very eyes living (abiding) among us.

So, keeping in mind Chapter 1, and keeping an eye out for the words "flesh," and "abide," action in Chapter 6 progresses as follows:

The words he has spoken to us are spirit and life. But there are some among us who still do not believe. Still do not trust. Still are not willing to bond with him.

You have the words (the seat of) of eternal life
We have come to believe (trust) and know (bond with) that you are the Holy One of God.

As in Matthew, Mark and Luke, this belief / faith / trust is the hinge upon which the rest of the story turns. Indeed, for John, this is the whole reason for his writing this Gospel:

These (signs) are written so that you (the reader) may come to believe that Jesus is the Christ, and that through believing, you may have life in his name.
John 20:31

John wants us to come to believe, to come to trust. To have life. Not the life of this flesh that ends in death. But to have the life of the Word that became flesh - full of grace and truth.

Note: Historical background information in this post is drawn primarily from Bruce Malina and Richard Rohrbaugh, Social-Science Commentary on the Gospel of John, pages 134-138; and the writings of Amy-Jill Levine, et. al. See below.

56 Those who eat my flesh and drink my blood abide in me, and I in them. 57 Just as the living Father sent me, and I live because of the Father, so whoever eats me will live because of me. 58 This is the bread that came down from heaven, not like that which your ancestors ate, and they died. But the one who eats this bread will live forever." 59 He said these things while he was teaching in the synagogue at Capernaum.

60 When many of his disciples heard it, they said, "This teaching is difficult; who can accept it?" 61 But Jesus, being aware that his disciples were complaining about it, said to them, "Does this offend you? 62 Then what if you were to see the Son of Man ascending to where he was before? 63 It is the spirit that gives life; the flesh is useless. The words that I have spoken to you are spirit and life. 64 But among you there are some who do not believe." For Jesus knew from the first who were the ones that did not believe, and who was the one that would betray him. 65 And he said, "For this reason I have told you that no one can come to me unless it is granted by the Father."

66 Because of this many of his disciples turned back and no longer went about with him. 67 So Jesus asked the twelve, "Do you also wish to go away?" 68 Simon Peter answered him, "Lord, to whom can we go? You have the words of eternal life. 69 We have come to believe and know that you are the Holy One of God."

56 By eating my flesh and drinking my blood you enter into me and I into you. 57 In the same way that the fully alive Father sent me here and I live because of him, so the one who makes a meal of me lives because of me. 58 This is the Bread from heaven. Your ancestors ate bread and later died. Whoever eats this Bread will live always."

59 He said these things while teaching in the meeting place in Capernaum.

60 Many among his disciples heard this and said, "This is tough teaching, too tough to swallow." 61 Jesus sensed that his disciples were having a hard time with this and said, "Does this throw you completely? 62 What would happen if you saw the Son of Man ascending to where he came from? 63 The Spirit can make life. Sheer muscle and willpower don't make anything happen. Every word I've spoken to you is a Spirit-word, and so it is life-making. 64 But some of you are resisting, refusing to have any part in this." (Jesus knew from the start that some weren't going to risk themselves with him. He knew also who would betray him.) 65 He went on to say, "This is why I told you earlier that no one is capable of coming to me on his own. You get to me only as a gift from the Father."

66 After this a lot of his disciples left. They no longer wanted to be associated with him. 67 Then Jesus gave the Twelve their chance: "Do you also want to leave?"

68 Peter replied, "Master, to whom would we go? You have the words of real life, eternal life. 69 We've already committed ourselves, confident that you are the Holy One of God."