Matthew wants us to trust that ... God can and does protect, guide, warn, and keep alive from generation to generation the alternative Jesus-vision of what is really real: God is love and love is the only response that will ultimately end violence. 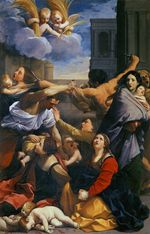 Herod killed all the boys under 2 years of age

Year A
Christmas 1
January 1, 2023
Sunday between December 26 and January 1 inclusive

It is difficult to be confident of the actual historicity of the events recorded in Matthew and Luke about the birth of Jesus.

Like our own family stories, they are recalled by second and third generations as a way of informing responses to questions of their identity: Who are we? How did we get to be here? Who were our ancestors and how were their lives formed? What events in their lives resulted in us being the people we have become? What honour and mandate have we inherited from our ancestors? What honour and mandate must we bestow on our descendants?

And so, whatever actually happened at the birth of Jesus is recalled and retold NOT to answer OUR questions about historical accuracy and scientific factuality. Memories of those events were intuitively and naively selected and recast into a story that will inform, shape, guide and warn the adopted descendants of Jesus (i.e., his followers) as they too seek to embody the love of God in a dangerous world.

Matthew first addresses these questions of identity and purpose by tracing the ancestry of Jesus as a descendant of King David - and therefore a rightful inheritor of God's promise that a descendant of David would reign on the throne of Israel forever. (2 Samuel 7:12-16)

Secondly, Matthew reports how events were guided by messages, events, and interventions from the heavens:

And thirdly, Matthew reports how events took place to fulfill what had been spoken in Scriptures:

And so it is possible to come to this text and read it as all merely part of a divine plan; and fail to be stopped by the enormity of the human suffering and tragedy it reports.

Here we are - reading the story of the birth of the one named "Jesus," "for he will save his people from their sins" - and one of the first things that happens is that innocent children are slaughtered because of his birth.

Clearly then, the "fulfillment" of scripture in Matthew is NOT to be understood as a termination of the ways of the world. The birth of Jesus does not put an end to human tragedy.

Instead, Matthew wants us to trust that the birth of Jesus demonstrates:

13 Now after they had left, an angel of the Lord appeared to Joseph in a dream and said, "Get up, take the child and his mother, and flee to Egypt, and remain there until I tell you; for Herod is about to search for the child, to destroy him." 14 Then Joseph got up, took the child and his mother by night, and went to Egypt, 15 and remained there until the death of Herod. This was to fulfill what had been spoken by the Lord through the prophet, "Out of Egypt I have called my son."

16 When Herod saw that he had been tricked by the wise men, he was infuriated, and he sent and killed all the children in and around Bethlehem who were two years old or under, according to the time that he had learned from the wise men. 17 Then was fulfilled what had been spoken through the prophet Jeremiah:
18 "A voice was heard in Ramah,
wailing and loud lamentation,
Rachel weeping for her children;
she refused to be consoled,
because they are no more."

19 When Herod died, an angel of the Lord suddenly appeared in a dream to Joseph in Egypt and said, 20 "Get up, take the child and his mother, and go to the land of Israel, for those who were seeking the child's life are dead." 21 Then Joseph got up, took the child and his mother, and went to the land of Israel. 22 But when he heard that Archelaus was ruling over Judea in place of his father Herod, he was afraid to go there. And after being warned in a dream, he went away to the district of Galilee. 23 There he made his home in a town called Nazareth, so that what had been spoken through the prophets might be fulfilled, "He will be called a Nazorean."

13 After the scholars were gone, God's angel showed up again in Joseph's dream and commanded, "Get up. Take the child and his mother and flee to Egypt. Stay until further notice. Herod is on the hunt for this child, and wants to kill him."

14 Joseph obeyed. He got up, took the child and his mother under cover of darkness. They were out of town and well on their way by daylight. 15 They lived in Egypt until Herod's death. This Egyptian exile fulfilled what Hosea had preached: "I called my son out of Egypt."

16 Herod, when he realized that the scholars had tricked him, flew into a rage. He commanded the murder of every little boy two years old and under who lived in Bethlehem and its surrounding hills. (He determined that age from information he'd gotten from the scholars.) 17 That's when Jeremiah's sermon was fulfilled:
18 A sound was heard in Ramah,
weeping and much lament.
Rachel weeping for her children,
Rachel refusing all solace,
Her children gone,
dead and buried.

19 Later, when Herod died, God's angel appeared in a dream to Joseph in Egypt: 20 "Up, take the child and his mother and return to Israel. All those out to murder the child are dead."

21 Joseph obeyed. He got up, took the child and his mother, and reentered Israel. 22 When he heard, though, that Archelaus had succeeded his father, Herod, as king in Judea, he was afraid to go there. But then Joseph was directed in a dream to go to the hills of Galilee. 23 On arrival, he settled in the village of Nazareth. This move was a fulfillment of the prophetic words, "He shall be called a Nazarene."

Thanks Emily.
I hope your ministry which is now in its infancy, also grows in stature and wisdom, and in favour with God - and the people you will serve.

I wanted to thank you for the list of what Jesus hopes to demonstrate in this story. One, I love lists. Two, this is my first Christmas as pastor of a church, and it's of course busy. Your blog was very helpful to get my mind going.