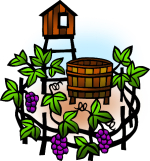 It beats me why the creators of the Lectionary have us reading events from Holy Week for the months of October and November.

I guess it is to give us ample opportunity to explain that the clash between Jesus and the religious leaders of his time is NOT a clash between Christianity and Judaism; they should NOT be read as Jesus teaching that Christianity replaces Judaism; the Church replaces Israel. The phrase in Verse 43, "Taken away from you and given to a people that produces the fruit of the Kingdom," does NOT mean "taken away from you Jews and given to Christians." In my not-so-humble-opinion, Jesus means, "Taken away from you corrupt religious Jewish leaders and given to Jews who will put their trust in God." For more on this read my post, It's “Judeans,” not “Jews.”

As usual, the parable in today's text uses a real life situation that would be well-known to Jesus' listeners: foreign ownership and exploitation.

Centuries of exploitation and occupation had made it only a faint memory / dream, but in the background would be the awareness that the land in question was "promised land," land given in the promise of no more slavery and oppression, no more hunger and homelessness.

The details of the parable are fairly straight forward, though the rebellious, violent actions of the tenants would create diverse excitements among Jesus' hearers:

If, as I believe we must, we hear this as a parable directed at us, that is, we are the tenants in the story; then the first response to the text is a full and frank confession of just exactly what have we done with the beautiful, abundant, liberating, welcoming, good news of Jesus Christ? (Have I already mentioned that I think these texts should be read during Lent and not October and November?)

However, since Jesus is indeed good news, our first response should not be our last response. We need also to reflect on the second and third chances that are offered in the parable. And ask ourselves: What are we going to do with all these beautiful grapes? With all this good wine? With the trust that has been bestowed on us? We are certainly frail, faulty and sinful. Can we also be honourable and keep our side of the lease agreement?

Historical background information in this post is drawn primarily from Social-Science Commentary on the Synoptic Gospels, see below, pages 109-110.

33 "Listen to another parable. There was a landowner who planted a vineyard, put a fence around it, dug a wine press in it, and built a watchtower. Then he leased it to tenants and went to another country. 34 When the harvest time had come, he sent his slaves to the tenants to collect his produce. 35 But the tenants seized his slaves and beat one, killed another, and stoned another. 36 Again he sent other slaves, more than the first; and they treated them in the same way. 37 Finally he sent his son to them, saying, 'They will respect my son.' 38 But when the tenants saw the son, they said to themselves, 'This is the heir; come, let us kill him and get his inheritance.' 39 So they seized him, threw him out of the vineyard, and killed him. 40 Now when the owner of the vineyard comes, what will he do to those tenants?" 41 They said to him, "He will put those wretches to a miserable death, and lease the vineyard to other tenants who will give him the produce at the harvest time."

42 Jesus said to them, "Have you never read in the scriptures:
'The stone that the builders rejected
has become the cornerstone;
this was the Lord's doing,
and it is amazing in our eyes'?
43 Therefore I tell you, the kingdom of God will be taken away from you and given to a people that produces the fruits of the kingdom. 44 The one who falls on this stone will be broken to pieces; and it will crush anyone on whom it falls."

45 When the chief priests and the Pharisees heard his parables, they realized that he was speaking about them. 46 They wanted to arrest him, but they feared the crowds, because they regarded him as a prophet.

33 "Here's another story. Listen closely. There was once a man, a wealthy farmer, who planted a vineyard. He fenced it, dug a winepress, put up a watchtower, then turned it over to the farmhands and went off on a trip. 34 When it was time to harvest the grapes, he sent his servants back to collect his profits.

35 "The farmhands grabbed the first servant and beat him up. The next one they murdered. They threw stones at the third but he got away. 36 The owner tried again, sending more servants. They got the same treatment. 37 The owner was at the end of his rope. He decided to send his son. 'Surely,' he thought, 'they will respect my son.'

38 "But when the farmhands saw the son arrive, they rubbed their hands in greed. 'This is the heir! Let's kill him and have it all for ourselves.' 39 They grabbed him, threw him out, and killed him.

40 "Now, when the owner of the vineyard arrives home from his trip, what do you think he will do to the farmhands?"

41 "He'll kill them—a rotten bunch, and good riddance," they answered. "Then he'll assign the vineyard to farmhands who will hand over the profits when it's time."

42 Jesus said, "Right—and you can read it for yourselves in your Bibles:

The stone the masons threw out
is now the cornerstone.
This is God's work;
we rub our eyes, we can hardly believe it!

43 "This is the way it is with you. God's kingdom will be taken back from you and handed over to a people who will live out a kingdom life. 44 Whoever stumbles on this Stone gets shattered; whoever the Stone falls on gets smashed."

45 When the religious leaders heard this story, they knew it was aimed at them. 46 They wanted to arrest Jesus and put him in jail, but, intimidated by public opinion, they held back. Most people held him to be a prophet of God.

Posted at 03:52 PM in October, Pentecost, Year A | Permalink