Peter rebukes Jesus. Jesus rebukes Peter. Calls Peter - or at least Peter's rebuke - Satan. That is, Tempter, Snake in the Garden, Introducer of Hesitation, Mixer of Motivations, Flaunter of Red Herrings, Side-Tracker of Mission, Setter of One's Mind on Human Things. Well, fear of pain and death will do that to most people, and Peter was no exception. 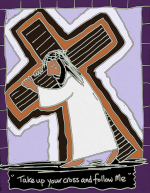 Any who would be my followers must ...

When a passage begins with "From that time," it is usually a good idea to check back and see what the time / space reference is.

In this case, "From that time" refers to 16:13-20, where Jesus seeks confirmation from his inner group of disciples of what the gossip is about him - "Who do people say that I am?" And then of their assessment - "Who do you say that I am?"

When Peter says, "You are the Messiah," he confirms the authority of Jesus - as seen by others - to now take his show on the road to Jerusalem.

In a very real sense, up to now Jesus has been working the small town stages to build up his street cred's. And having made a name for himself, he is now ready to tackle the big leagues - Jerusalem and the Roman authorities.

The rest of Chapter 16 and all of Chapters 17 to 20 are the road trip to the big city - and Jesus' teachings and actions are now all focused on preparing his followers for the actions that will happen there as Jesus brings his proclamation of the Kingdom of God into direct, face-to-face, confrontation with the Empire of Rome.

Poor old Jesus. In Verse 16, his core inner followers affirm that they have "got it;" that they understand his authority and his mission. Seven short verses later, Peter reveals that they are still mis-understanding and/or unwilling to follow the logic of what he has been teaching them.

The prediction of his suffering and rejection by the religious authorities is actually not rocket science, nor does it require any special divinity on Jesus' part. Given the exalted status now being attributed to Jesus by the people, and given his challenge to the authority of the elders, chief priests and scribes, everyone alive then would know that this could only end badly.

The prediction of his resurrection is a different matter. That adds a whole new, completely novel twist.

As the one who proclaimed the new honour status of Jesus in Verse 16, Peter is quite unnerved by Jesus' teaching in Verse 21.

In Verse 16, Peter was not only affirming a high honour status for Jesus, but was also affirming his loyalty to Jesus. And as such, Peter was also anticipating participating in sharing the rewards of Jesus' honour as Messiah.

Peter and the other disciples know that their loyalty to Jesus demands that they share this fate - just as they had earlier expected to share a quite different outcome. Peter would be surprised, shocked and made fearful by Jesus' teaching in Verse 21.

Peter rebukes Jesus. Jesus rebukes Peter. Calls Peter - or at least Peter's rebuke - Satan. That is, Tempter, Snake in the Garden, Introducer of Hesitation, Mixer of Motivations, Flaunter of Red Herrings, Side-Tracker of Mission, Setter of One's Mind on Human Things. Well, fear of pain and death will do that to most people, and Peter was no exception.

Verses 24-26 repeat a teaching from Matthew 10:38-39. But in this context, we hear this teaching not as a wise proverb, but as what Jesus is setting out to do:

Verses 27-28 need to be read in an upbeat tone of voice, and not as a finger-wagging threat.

Jesus is breaking down the social barriers between his peasant followers and the Most High.

At the time of Jesus, a peasant would never have access to a high official. But Jesus is saying that within their lifetimes, they will be repaid for their trust in and loyalty to him. This is good news indeed.

Historical background information in this post is drawn primarily from Social-Science Commentary on the Synoptic Gospels, see below, page 88.

21 From that time on, Jesus began to show his disciples that he must go to Jerusalem and undergo great suffering at the hands of the elders and chief priests and scribes, and be killed, and on the third day be raised. 22 And Peter took him aside and began to rebuke him, saying, "God forbid it, Lord! This must never happen to you." 23 But he turned and said to Peter, "Get behind me, Satan! You are a stumbling block to me; for you are setting your mind not on divine things but on human things."

24 Then Jesus told his disciples, "If any want to become my followers, let them deny themselves and take up their cross and follow me. 25 For those who want to save their life will lose it, and those who lose their life for my sake will find it. 26 For what will it profit them if they gain the whole world but forfeit their life? Or what will they give in return for their life? 27 "For the Son of Man is to come with his angels in the glory of his Father, and then he will repay everyone for what has been done. 28 Truly I tell you, there are some standing here who will not taste death before they see the Son of Man coming in his kingdom."

21 Then Jesus made it clear to his disciples that it was now necessary for him to go to Jerusalem, submit to an ordeal of suffering at the hands of the religious leaders, be killed, and then on the third day be raised up alive. 22 Peter took him in hand, protesting, "Impossible, Master! That can never be!"

23 But Jesus didn't swerve. "Peter, get out of my way. Satan, get lost. You have no idea how God works."

24 Then Jesus went to work on his disciples. "Anyone who intends to come with me has to let me lead. You're not in the driver's seat; I am. Don't run from suffering; embrace it. Follow me and I'll show you how. 25 Self-help is no help at all. Self-sacrifice is the way, my way, to finding yourself, your true self. 26 What kind of deal is it to get everything you want but lose yourself? What could you ever trade your soul for?

27 "Don't be in such a hurry to go into business for yourself. Before you know it the Son of Man will arrive with all the splendor of his Father, accompanied by an army of angels. You'll get everything you have coming to you, a personal gift. 28 This isn't pie in the sky by and by. Some of you standing here are going to see it take place, see the Son of Man in kingdom glory."

Posted at 02:15 PM in August, Pentecost, September, Year A | Permalink