Having created the impossible-possibility of a despised no-body doing what is needed to inherit eternal life, ... presents a double challenge. First. To be able to see someone we despise as being able to do what God desires. Second. To imagine ourselves lying left-for-dead in a ditch and being aided by such a one. 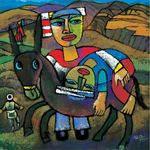 He took care of the wounded stranger

This lesson shows us Jesus' great skill as a debater and story-teller.

Verses 25 to 29. At the time of Jesus, the honourable way for an elite person to put a lower-class upstart back into their proper place was to verbally challenge them in front of a crowd; and cause them to lose face by making public the upstart's lack of real knowledge and true wisdom.

So when the lawyer stands up to test Jesus by asking, "What must I do to inherit eternal life;" this is not an honest question. It is a hostile question intended to expose Jesus' lack of knowledge about the answer that is already given in Scripture and tradition.

However. Because Jesus is acting with the authority given him from God - it would be DIShonourable for him to directly answer such a question. To do so would draw attention to himself; would be shameful boasting. He would be seen as trying to claim personal honour / merit, and a higher status based on his own authority.

As an honourable Son who is truly worthy of acting on behalf of, and with the authority of the Father, Jesus always deflects such direct challenges with questions of his own that both sharpen and deepen the debate; that require the challenger - and the watching crowd - to make their own assessment; and that use the Scripture - the already received revelations of the Father - to answer the challenge.

We see this in the pattern:

Verses 30 to 35. Bruce Malina and Richard Rohrbaugh provide crucial historical background for this story (Page 270f, see footnote below. The use of bullets, and the comments in brackets are my own. Otherwise the following is a quotation.):

Verse 36. Having created the impossible-possibility of a despised no-body doing what is needed to inherit eternal life, Jesus now responds - as usual - to the lawyer's question with a question.

Verse 37. And while the crowd watches, the lawyer must concede the unwelcome truth of Jesus' story. To which, Jesus again replies, "Go, and do it."

Linking the love of God with one's whole self to the love of one's neighbour as oneself has the uncomfortable effect of pushing all other social customs, protocols, histories and hierarchies down to third place on our "what to do today" list of priorities. This includes religious ones - like being faithful church members! Yikes.

What would happen in our congregation if no one ever came to a meeting until after they had checked "Love God," "Love my neighbour," and "Love myself" off their to-do list?

Assuming - contrary to Malina and Rohrbaugh - that a person lying in the ditch is someone we could identify with presents a double challenge.

First. To be able to see someone we despise as being able to do what God desires.

Second. To imagine ourselves lying left-for-dead in a ditch and being aided by such a one.

Alan Roxburgh, Missional: Joining God in the Neighbourhood, 2011, Ch. 10. (I'm reading this an iBook and can't give a paper page reference.)

29 But wanting to justify himself, he asked Jesus, "And who is my neighbor?" 30 Jesus replied, "A man was going down from Jerusalem to Jericho, and fell into the hands of robbers, who stripped him, beat him, and went away, leaving him half dead. 31 Now by chance a priest was going down that road; and when he saw him, he passed by on the other side. 32 So likewise a Levite, when he came to the place and saw him, passed by on the other side. 33 But a Samaritan while traveling came near him; and when he saw him, he was moved with pity. 34 He went to him and bandaged his wounds, having poured oil and wine on them. Then he put him on his own animal, brought him to an inn, and took care of him. 35 The next day he took out two denarii, gave them to the innkeeper, and said, 'Take care of him; and when I come back, I will repay you whatever more you spend.' 36 Which of these three, do you think, was a neighbor to the man who fell into the hands of the robbers?" 37 He said, "The one who showed him mercy." Jesus said to him, "Go and do likewise."

25 Just then a religion scholar stood up with a question to test Jesus. "Teacher, what do I need to do to get eternal life?"

26 He answered, "What's written in God's Law? How do you interpret it?"

27 He said, "That you love the Lord your God with all your passion and prayer and muscle and intelligence—and that you love your neighbor as well as you do yourself."

29 Looking for a loophole, he asked, "And just how would you define 'neighbor'?"

30 Jesus answered by telling a story. "There was once a man traveling from Jerusalem to Jericho. On the way he was attacked by robbers. They took his clothes, beat him up, and went off leaving him half-dead. 31 Luckily, a priest was on his way down the same road, but when he saw him he angled across to the other side. 32 Then a Levite religious man showed up; he also avoided the injured man.

33 "A Samaritan traveling the road came on him. When he saw the man's condition, his heart went out to him. 34 He gave him first aid, disinfecting and bandaging his wounds. Then he lifted him onto his donkey, led him to an inn, and made him comfortable. 35 In the morning he took out two silver coins and gave them to the innkeeper, saying, 'Take good care of him. If it costs any more, put it on my bill—I'll pay you on my way back.'

36 "What do you think? Which of the three became a neighbor to the man attacked by robbers?"

37 "The one who treated him kindly," the religion scholar responded.